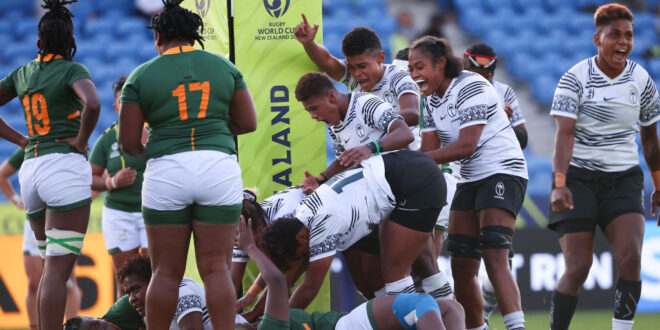 Round two of this year’s Rugby World Cup pool stages is complete, with Canada and New Zealand joining England in booking their places in the quarter-finals with wins over Italy and Wales respectively on Sunday.

It was an entertaining day at Waitakere Stadium in Auckland and we’ve picked out a few things you may have missed as well as some social media goings-on.

There was a cracking end to the second round of pool matches as Fiji and South Africa delivered a highly entertaining match on Sunday evening. The Fijiana coaches may have rued the error count but for the neutrals in the crowd, it was a brilliant spectacle, with both sides playing with a real joie de vivre.

Fittingly, there was a dramatic finish as South Africa looked to have won the game with a late penalty only for Fijiana to win the ball back at the restart and score under the posts to snatch the victory.

It was their first-ever World Cup win in only their second World Cup match. And it has been quite a journey for the squad – as World Rugby have documented.

Portia Woodman was in superb form as New Zealand ran in ten tries in their 56-12 win over Wales – and she is also continuing to set records.

Her hat-trick against Australia last week meant she overtook Vanessa Cootes (13) and Jonah Lomu (15) as New Zealand’s top try-scorers in World Cup history, men’s or women’s, with 16. And she extended that record on Sunday with another two tries against the Welsh.

She has already scored more World Cup tries than any men’s player – Bryan Habana jointly holds that record with Lomu – and is closing in on the women’s record. England’s Sue Day scored 19 tries across the 1998, 2002 and 2006 tournaments, so if Woodman touches down twice more at this tournament she will set a new mark.

Ruby Tui does it again

Ruby Tui’s post-match interviews are fast becoming legendary as she delivered another brilliant one after round two. The Black Ferns star raved about women’s rugby and the standards we’re seeing at this tournament.

Italy got day four off to a brilliant start when scoring a try within the first minute of their match against Canada. Vittoria Ostuni Minuzzi broke through a cluster of Canada defenders then weaved away from a few others to score in the corner.

They didn’t score again until the last minute of the match as they lost 22-12, but they still sit second in Pool B and are on track to reach the last eight as they are favourites to beat Japan in their final pool game.

Sarah Hunter became England’s joint most-capped player, alongside Rocky Clark, when winning her 137th cap in the win over France. That prompted a mutual love-in on social media!

Head to our Rugby World Cup hub page for all the latest from New Zealand.