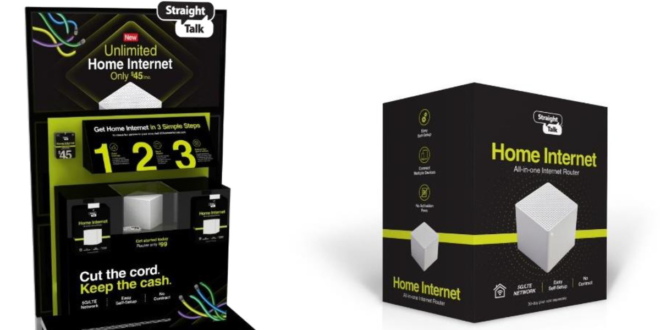 Straight Talk, a subsidiary of Verizon’s Tracfone provider, is now offering a prepaid 5G home internet service that you can sign up for without having to go through a credit check. The $45 per month service uses Verizon’s 5G and 4G networks and a router, available at “nearly 2,000 Walmart stores across the country,” according to a press release, to provide home internet without having to have a company come and hook up a modem. But while the company pitches it as an affordable option, there are definitely some considerations you’ll want to take into account if you’re looking to get cellular internet as cheaply as possible.

Compared to Verizon’s 5G home internet plans, Straight Talk’s home internet is less expensive in most cases. Verizon’s 5G Home service is $50 a month with autopay and $60 without, and its 5G Home Plus tier is $70 with autopay and $80 without. At those prices, you’ll be saving at least $5 a month by going with the Straight Talk option. (Though there’s an asterisk there that we’ll get to in a second.)

However, if you have the Verizon 5G Do More, 5G Play More, 5G Get More, or One Unlimited for iPhone plans for your phone, those monthly prices drop to $25 and $35, respectively. Those certainly aren’t budget-oriented cell plans, but if you’re trying to optimize every dollar and are set on getting cellular internet, it’s worth doing the math to see if going with the combo would be a better deal.

It’s also worth noting that the Straight Talk home internet plan appears to have some speed limitations compared to Verizon’s; the press release promises “speeds up to 100 Mbps on 5G or 50 Mbps on 4G LTE.” Meanwhile, Verizon’s basic 5G home internet plan promises 70Mbps on LTE and 85–300Mbps while on 5G; go with the Plus plan, and you may even get 1,000Mbps if you’re lucky enough to live close to an Ultra Wideband high-band tower.

Another thing hurting the value proposition of the Straight Talk option is that you have to buy the router for $99, while Verizon’s plans include it at no extra cost. That means that it’ll be 20 months before you actually see any savings from the $5 a month cheaper price point for Straight Talk’s service. To be fair, that time frame drops down to around seven months when compared to the non-autopay price.

That router, by the way, doesn’t appear to be Verizon’s recently announced upgraded home internet router. That one supports tri-band Wi-Fi 6E, while Straight Talk says its router is dual-band and uses the less powerful Wi-Fi 6. That’s not necessarily unreasonable for a service marketed toward budget-oriented customers (especially given those speed caps), but given that you have to actually pay for the router, it would’ve been nice to get the better one.

I’m aware that I may have come across as being a bit down on this service. I do want to make it clear that I think it’s a good thing that it exists and that Verizon is making 5G home internet available to people who (like me) can’t pass a credit check or who need the ability to pay their bill in cash. I just wish that it were giving them a service that’s actually budget-friendly, rather than just very slightly cheaper as long as you keep it long enough that the savings add up to the cost of the router.

For that matter, I also wish that T-Mobile hadn’t pulled basically the exact same move when it announced its credit check-free 5G home internet service through Metro. Though at least with that, you could expect the same internet speeds as prepaid customers provided you live in an area with reasonable coverage.