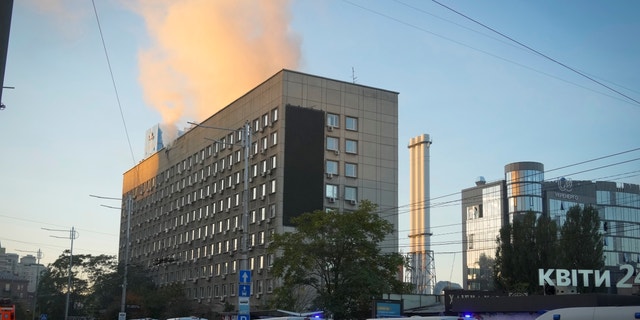 Kyiv rocked by explosions a week after Russian strikes across Ukraine

Drone strikes hit Kyiv early Monday morning, damaging a residential building and injuring an unknown number of people amid repeated attacks against the Ukrainian capital from Russia forces over the past week.

Kyiv city mayor Vitaliy Klichko announced that the Shevchenko district was impacted, urging residents to take shelter. Anton Gerashchenko, an advisor to Ukraine’s Minister of Internal Affairs, confirmed that a residential building was hit during the attacks, but officials have not released details about casualties.

Klichko reported that several apartment blocks were damaged, in addition to a fire igniting in a non-residential building.

Black smoke and flames were seen near the apparent strikes. The explosion sounds were reportedly heard in the same Kyiv district where a missile recently destroyed a children’s playground.

Russian forces have attacked Kyiv consistently with so-called “kamikaze” drones over the past week. The Shahed-136 drones, which are manufactured in Iran, have been used by Russia to target vital energy infrastructure and urban centers.

A recent report by the Institute for the Study of War theorized that Iranian Revolutionary Guard Corps (IRGC) troops may have traveled to Russian-held territories to help train Putin’s troops.

The use of Shahed-136 drones ramped up after the Russo-Ukrainian War escalated through Vladimir Putin’s annexation of the Donetsk, Luhansk, Kherson and Zaporizhzhia regions in September. Strikes in central Kyiv were rare occurrences before Putin’s illegal annexation, which has been denounced by Western leaders. 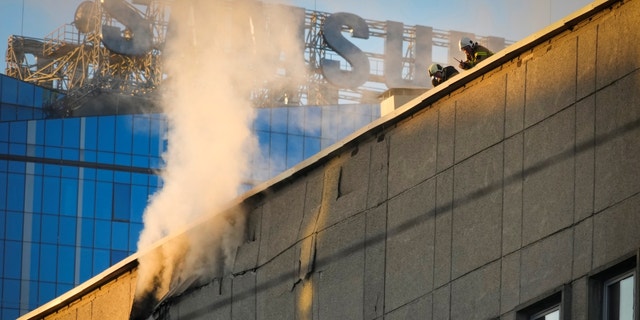 Putin has defended last week’s strikes, saying there were in retaliation against Ukrainian forces bombing a Crimean bridge.

Over the weekend, there was intense fighting around the cities of Bakhmut and Soledar in the Donetsk region, as well as the Luhansk region, according to Ukrainian President Volodymyr Zelenskyy. 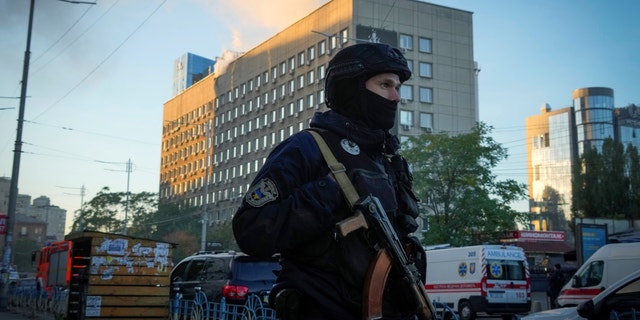 Police block the perimeter at the scene of Russian shelling in Kyiv, Ukraine, Monday, Oct. 17, 2022, after some explosions rocked Kyiv in the early morning.
(AP Photo/Efrem Lukatsky)

The Donetsk region’s Russian-backed government reported on Sunday that its central administrative building was directly hit by Ukraine, but did not report casualties.

The Associated Press and Fox News’ Peter Aitken contributed to this report.

Previous Katie Porter berated Irvine mayor in texts: ‘lecture me’ on ‘professionalism’ and ‘see what happens’
Next Republicans kick off battleground state tour to ‘catapult’ GOP candidates ‘to victory’