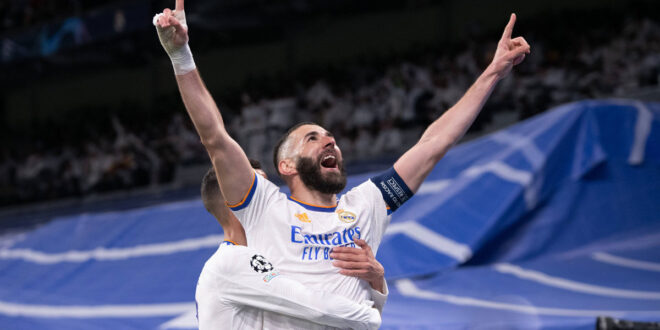 Perhaps at last it can be said that the era of Lionel Messi and Cristiano Ronaldo is over. After 12 Ballons d’Or between them in 14 years (their hegemony broken only by Luka Modrić in 2018 and the suspension of the award because of the COVID-19 pandemic in 2020, although the strong suspicion is that Robert Lewandowski would have won it then), it was Karim Benzema who was crowned on Monday.

Individual awards always seem a little artificial in a sport as team-oriented as football, and were Messi to extend his recent golden form to lead Argentina to World Cup glory in Qatar, it may come to seem a little odd, but Benzema was an uncontroversial enough choice—and there’s not much France Football, the magazine that administers the award, can do about the timing of major tournaments. It did, however, elect to move the window for candidacies to match the European club calendar and not the calendar year, which all but secured the trophy for Benzema.

Real Madrid’s progress to a 14th European championship was far from smooth, and it felt almost like a rebuke to the systems-drive approach that so dominates much modern top-level football. From the last 16 to the semifinal, Madrid saw off Paris Saint-Germain, Chelsea and then Manchester City with a series of increasingly implausible comebacks, carried by the performances of goalkeeper Thibaut Courtois (seventh in the Ballon d’Or voting), Modrić (ninth) and the unimpeachable Benzema.

Strikers almost always get the credit, particularly when it comes to individual awards, but in this case the praise was justified. Against PSG, Madrid trailed 2–0 with half an hour of the second leg remaining when Benzema suddenly scored a brilliant hat trick. That was extraordinary enough, but it was just the beginning.

Away against Chelsea in the quarterfinal, Benzema struck twice in three minutes with headers of remarkable deftness, both requiring great core strength to twist in the air and guide the ball past Édouard Mendy. He completed a second successive Champions League hat trick a minute after halftime. Then in the second leg, after Chelsea had hit back and Rodrygo’s late equalizer had carried the tie into extra time, it was Benzema who got the winner with another fine header.

In the first leg of the semifinal, as Manchester City threatened to demolish Madrid, it was a sharp first-time Benzema finish that checked the momentum of the game, getting his side back into it at 2–1. It was then his late penalty that made it 4–3, keeping Madrid in a tie in which it could easily have been five or six goals behind. He was a little quieter in the second leg, but after Rodrygo’s two injury-time goals had salvaged extra time, it was Benzema’s penalty that won it.

That accounted for 10 goals in five Champions League knockout games, and scored in a variety of ways: headers, penalties, first-time shots, a range that demonstrates his versatility as a striker. He also scored a La Liga–leading 27 goals last season (and has managed three in five matches in an injury-hit campaign so far this season). There is an undeniable sense of liberation about him, as though after years of being the support act for Cristiano Ronaldo, he could finally break out on his own. In doing so, he has become the fifth French player to win the award that originated in the country, joining Raymond Kopa, Michel Platini, Jean-Pierre Papin and Zinedine Zidane. (It was Zidane who presented Benzema with the trophy on Monday.)

And it was, perhaps, his final chance to win the Ballon d’Or. Benzema will turn 35 in December, a day after the World Cup final. Players are enjoying longer careers these days and he is undoubtedly fit, but looming on the horizon, perhaps some way over it, are natural successors Kylian Mbappé and Erling Haaland. Mbappé’s development may have been checked by his decision to stay at PSG in the summer—although were he to play a starring role in France winning the World Cup and PSG finally lifting the Champions League next June, his recent petulance forgotten, that decision may be viewed in a rather different light—but Haaland’s goal-scoring for City is threatening to break records that have stood for almost a century.

There has been a persistent feeling that the way City plays, its extreme team-oriented approach, counts against it when it comes to individual awards. Last season, as City won the Premier League again and led the Champions League semifinal going into injury time, who was its star? Kevin De Bruyne? João Cancelo? Phil Foden? Ederson? Raheem Sterling? It’s not entirely obvious, which is probably why Mohamed Salah won both the Footballer Writers’ and Players’ Player of the Year last season.

Haaland, though has a quality of difference underlined by his goals. If City wins the league and gets to at least the last four of the Champions League, assuming Haaland keeps going somewhere near the level he is currently at, it would take a run like Benzema’s in last season’s Champions League to beat him next year.

But Benzema’s success of 2022 is well-deserved—and it may be the last before a new era of hegemony dawns.