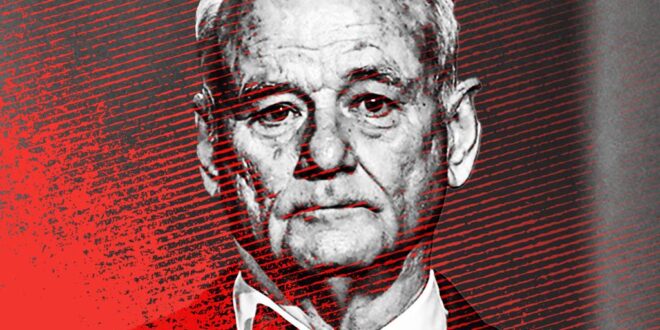 Some jokes fall flat. Take the one where a masked Bill Murray thinks it would be a riot for him to kiss a much younger woman and then straddle her.

Production was shut down on the half-finished Disney Searchlight medical drama “Being Mortal” after Murray was accused of doing just that to a “much younger” staffer. After Murray paid the woman — who, it was reported by Puck, was allegedly unable to move under the weight of the actor — more than $100,000 to keep details of the incident to herself and abstain from suing the film’s producers, it became clear that not everybody appreciates the aging actor’s out-of-touch hijinks.

“I was zero percent surprised when news broke about the incident on ‘Being Mortal.’ The only surprising thing is that this hasn’t happened sooner,” a producer who has worked with Murray told The Post. “Bill Murray flirts with [people] on a set and it goes too far. Kissing someone with a mask is too far. It’s his way of hitting on women, though I haven’t seen him touch anyone.”

“Women are there to be flirted with and hit on,” the producer added of Murray’s MO. “And it wasn’t only the young PAs he hit on in the production; he’d hit on any woman. I saw him flirting with women in makeup and costume.”

A source previously told Page Six that Murray was “very hands-on touchy [on the production of ‘Being Mortal’] … but always in a comedic way.”

The Post reached out to Murray’s lawyer, who did not reply.

On the one hand, he’s become known for fun interactions with fans: giving a Chicago Cubs’ fan a 2016 World Series ticket outside Wrigley Field, spontaneously reading poetry to construction workers putting up a library, or tending bar at 21 Greenpoint, the Brooklyn restaurant owned by his son Homer.

But Hollywood insiders have started revealing a different, much darker aspect to Murray’s personality: a tendency to embarrass and be aggressive toward coworkers.

Sean O’Banion was a production assistant on the 2000 film “Charlie’s Angels” and witnessed the response to a now-notorious incident in which Murray turned on co-star Lucy Liu over a script rewrite that was allegedly done without his knowledge. According to Liu, Murray started to “hurl insults” at her.

A fed up Liu, O’Banion told The Post, “called [Murray] a ‘f–king c–ksucker’ and walked off the set. We all stood there with our mouths open. Within an hour, though, they resumed filming. Bill did not come back for the sequel.”

Lucy Liu’s spokesperson did not respond to a request for comment.

That film’s director, McG, has also claimed that Murray head-butted him during production. Murray denied this to the London Times, describing the allegation as “Bulls–t … Complete crap.”

But it is not the only claim that the actor got physical on set. Murray allegedly threw an ashtray at Richard Dreyfuss during the filming of 1991’s “What About Bob.” Additionally, during the making of the 1993 movie “Groundhog Day,” he stands accused of having pushed director Harold Ramis — also his co-star in “Ghostbusters” — against a wall in the midst of a heated conversation.

“On the first day of shooting for ‘Ghost Busters,’ he hoisted Sigourney Weaver up onto his shoulders [for no apparent reason],” Gavin Edwards, author of “The Tao of Bill Murray,” told The Post. “She was a good sport, but it was indicative of Murray’s dark side. There’s often a bit of putting other people in their places.”

Seth Green recently recalled on the YouTube show “Good Mythical Morning” how Murray once took issue with him sitting on the arm of a sofa backstage at “Saturday Night Live.” In response, Murray grabbed the ankles of Green, who was 9 years old at the time, and dangled him over a trash can before dropping him in. Green remembered the bin falling over, with him in it: “I ran away, hid under the table in my dressing room and just cried.”

And sometimes the behavior is purely insulting. Anjelica Houston claimed to New York magazine that, while filming “The Life Aquatic with Steve Zissou,” which was released in 2004, Murray “invited the entire cast to go have dinner, except me. … He was a s–t to me.”

In her new book, “Dying of Politeness,” Geena Davis alleges that, when she first met Murray, with whom she costarred in the 1990 movie “Quick Change,” he coerced her into letting him use a massage device on her back while she was on a bed in her hotel suite. Davis writes that she briefly acquiesced — and regretted it.

Davis also recently told Vanity Fair about how, after screaming at her, Murray proceeded to “tear apart” someone on set. “He thought he has to go off on somebody to make sure they ‘behave,’” she said.

A male crew member on the set of “Kingpin,” from 1996, remembers a scene in which Murray and Woody Harrelson’s characters competed in a bowling match before a crowd of some 300 extras. The crew member’s job was to pump up the crowd and get them energized for the scene.

“An extra shouted out that he wanted a T-shirt,” the crew member told The Post, recalling how he was giving extras a special shirt commemorating the movie. “Bill turned to Woody and said they should get T-shirts. Woody or Bill grabbed me and Bill took off my shirt in front of everyone. Then he tossed it into the crowd. I was 27 at the time and thought it was funny … If they did it to me now, at 47, I don’t think I would find it funny.”

Woody Harrelson’s publicist was contacted for comment and did not respond.

Sources told The Post that the public sometimes is so star-struck by Murray they don’t even realize his behavior is bad.

“There’s an undercurrent of hostility in many of these moments that he believes are designed to pull people out of their ruts and are supposed to wake him up,” author Edwards told The Post.

It’s one thing for Murray to sneak up and steal your French fries, as has happened to tourists in Times Square and Martha’s Vineyard; it’s another for him to grab and toss your phone off a rooftop, like he did to fans who were taking photos of him at a Carmel, Calif., restaurant in 2016.

“Sometimes you find him on a bad day and he’s hostile. But he gets away with a lot because of the reputation he’s created for himself,” Edwards told The Post. “I interviewed somebody who was there when Bill started a snowball fight with a bunch of people. He pegged this guy with a snowball, and the guy was furious — until he realized it came from Bill. Then he thought it was funny.”

That acceptance may have created a monster, though. “If every time your dog shits in your house, you gave him a treat,” said the producer source, “before you knew it, you’d have a house full of shit.

“Psychologically,” the producer added of Murray, “he is all id.”

When it comes to the most recent incident, Murray told CNBC, he had “a difference of opinion” with the woman he tried to kiss on set. “I did something I thought was funny and it wasn’t taken that way.” He described the fallout as “quite an educational experience” and added, “The world’s different from when I was a little kid.”

The producer described an on-set pecking order for Murray. “He seems to not recognize males on the set, except for those who can get him onto better golf courses,” said the producer. “When I would try getting his attention, he’d wave me away as if I was a gnat.

As to how the most recent bit of bad behavior will impact Murray’s way of operating in the future, the producer believes that the actor may change.

“If he really repents, and people think this won’t happen again, he will get hired,” the producer said. “But if he doesn’t come around and say something, he may have a harder time getting work.”