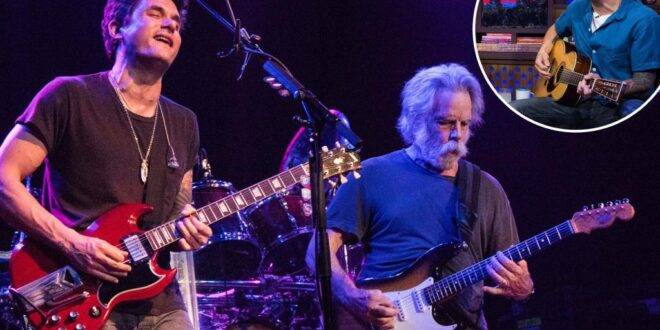 Weir, 75, who’s been on tour with his band Bob Weir & the Wolf Bros, was playing at The Warfield in San Francisco, California — 10 minutes away from the Iconic Ashbury Street, where the Grateful Dead was founded 67 years ago.

“Well, what we’re gonna need to do is everybody, everybody, to help me on this one,” Weir told the crowd, “We’re gonna sing Happy Birthday to a guy named John Mayer.”

The crowd erupted into cheers when hearing Mayers name, followed by a singing heartfelt Happy Birthday that left the venue shaking.

Mayer, who was friendly with Weir before joining the revived jam band, was invited to join the band as their lead guitarist and vocalist when Mayer was looking for something different out of his musical career.

“When Grateful Dead music found me, it was the perfect moment,” Mayer said in a 2016 interview with CBS Sunday Morning, “For me, [Grateful Deads music] rekindled the color of music.”

Dead & Company was formed by three of the surviving members of the Grateful Dead, Bob Weir, and drummers Bill Kreutzmann and Mickey Hart.

Since 2015, the band has held an annual summer tour, playing some significant venues like Citi Field, Wrigley Field and Oracle Park, packed out with the Deadheads.

In September, the band announced on their social media page that the 2023 tour would be their final as a group.

Tickets for the band’s final tour went on sale this past Friday.