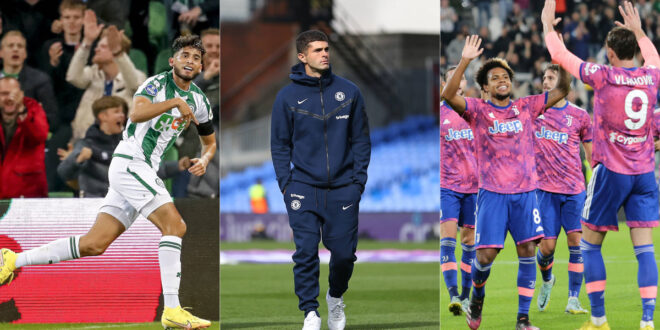 As the 2022 World Cup nears, there are plenty of U.S.-centric eyeballs affixed to Christian Pulisic and everything he does—and does not—do for club and country. Such is his importance to the U.S. men’s national team and its chances in Qatar.

After the U.S.’s pair of lackluster friendly showings against World Cup–bound teams, one of which Pulisic missed, the Chelsea winger didn’t seem particularly concerned. He preached the opposite of panic, embraced the “fresh start” that the World Cup will present and issued a challenge both to himself and his countrymen for the seven weeks ahead.

“It’s everyone for themselves in a sense,” he said, as players returned to their clubs for the final stretch before the World Cup break. “But that’s the message that we have to send: Do everything that you can to prepare your body physically, mentally, as best you can to be prepared once that time comes. And if everyone does that, I think we’re going to be in good shape for the World Cup.”

For Pulisic, that entails winning over another manager at Chelsea and getting himself back on the field enough to check all the boxes he listed. The early returns on what the Graham Potter era at Stamford Bridge means for the Pennsylvania native aren’t all that encouraging, though it appears the new coach is happy to approach Pulisic and all of his players with a clean slate.

Commenting on the U.S. international and the pointed comments Pulisic made in his book regarding former Chelsea manager Thomas Tuchel, Potter remained diplomatic and gave his first impressions of the player who just turned 24 a couple of weeks ago.

“I can’t comment on the book necessarily or what he’s said,” Potter said before this weekend’s win over Crystal Palace in his first Premier League match with Chelsea. “I think players go through periods of their careers where they have to suffer a little bit for whatever reason and don’t get their game time that they would like and it’s part of the job, it’s part of the sign up to being a Premier League. It’s not straightforward to be a regular in a top-four team.

“That’s not to say you don’t understand the player’s frustration when they don’t play. That’s what they want to do, that’s what makes them happy. I can only comment on him in terms of how he’s been with me. Really positive, he’s an intelligent guy, articulate, knows how to express himself. My conversation with him has been good and positive. I’m not going to judge anybody on what has happened in the past. I’m going to make my own mind up. Football hopefully decides.”

The sample size is small so far, but football’s decisions have not been markedly different than those of the previous regime. In two games under Potter, Pulisic has been an 84th-minute substitute both times. Chalk it up to a coincidence if you’d like, but either way, it’s not a lot of time to make an impact, and it’s a reminder that Pulisic is up against staunch competition at his position, not just a manager’s whims.

That said, when Pulisic has been at his best at Chelsea, it has often been as a game-changing sub, a player who can come on and unbalance a tiring defense with his pace and initiative in the key moments. That’s how he was able to be productive in his six-minute cameo at Selhurst Park, setting up Conor Gallagher for a memorable match-winner in the 90th minute.

Following a moment like that, perhaps football—and Potter—will be a bit more decisive in Pulisic’s favor. The reality is that Chelsea has a gantlet of matches between now and the World Cup, 12 across multiple competitions and a cadence that sees the club effectively play every three to five days. Opportunities should arise as squad rotation becomes necessary, and as long as Pulisic can heed his own message about staying prepared, his World Cup readiness should not be an issue.

Pulisic wasn’t the only key U.S. figure to deliver a key assist over the weekend, with Weston McKennie doing the same for Juventus. His came in less dramatic fashion but was impressive nevertheless, with the midfielder taking advantage of the acres of space afforded to him by Bologna’s slacking transition defense and putting a cross on the head of Serbian star Dušan Vlahović just before exiting at the hour mark.

The most notable goal contribution over the weekend for a U.S. international, however, may have come from Ricardo Pepi, who now has two goals and an assist in his three games on loan with Groningen in the Netherlands. On Saturday, Pepi outlasted one defender for a long, Route 1 ball before bodying another, turning and finishing for a consolation goal vs. AZ Alkmaar.

The 4–1 defeat didn’t benefit Pepi at all, but the goal was another sign of a player regaining his confidence after an awful spell in the Bundesliga with Augsburg. Pepi didn’t do much to separate himself from a crowded pack of U.S. forwards with his start vs. Saudi Arabia, but a purple patch with his temporary club could be all he needs to punch his ticket to Qatar. With Jordan Pefok playing 90 goalless minutes for Union Berlin, Haji Wright’s Turkish club out of action and Josh Sargent having a productive but goalless showing for Norwich City, Pepi was able to capitalize.

Aside from contributing on the scoresheet and operating in good form, health and fitness are top of the mind when it comes to the player pool, given that Gregg Berhalter’s squad announcement is just over five weeks away. Any injury that occurs now is likely to have a knock-on effect when it comes to World Cup hopes. So it must have made more than a few supporters’ hearts skip a beat when Brenden Aaronson was on the receiving end of this crunching tackle from Aston Villa’s Jacob Ramsey.

The U.S. is already battered enough as is. Antonee Robinson, Yunus Musah, Chris Richards, Reggie Cannon, Cameron Carter-Vickers and Gio Reyna all were out for their clubs this weekend, with the latter also set to miss Borussia Dortmund’s Champions League match at Sevilla this Wednesday as part of his seven-to-10-day recovery window.

There was some semblance of good news on the injury front, though, as Tim Weah was on Lille’s matchday roster for the first time all season after battling an ankle injury. He didn’t feature in his side’s defeat to Lorient, but it’s a step in the right direction for a player whose impetus and skill in the final third were sorely missed in goalless friendly efforts vs. Japan and Saudi Arabia. And with a trip to Qatar on the horizon, anything moving in the right direction—be it a goal contribution or a bill of good health—is a welcome sight.