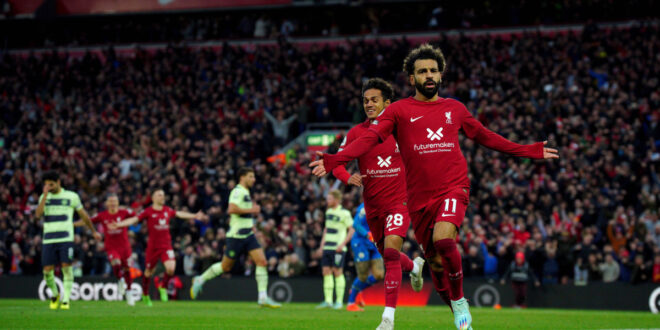 An afternoon of heavy rain and high emotion, of frayed tempers and exquisite drama, of Manchester City fallibility and, if not necessarily sparks of rebirth for Liverpool, then at least signs that some heat remains yet in the old embers. By the final whistle of a 1–0 Liverpool win, Jürgen Klopp had been sent off, a reinvigorated Mohamed Salah had scored the only goal and City’s unbeaten record this season had gone, leaving Arsenal four points clear at the top of the table.

Perhaps talk of Liverpool’s decline was always overdone. It has, after all, not lost at home in the league for a year-and-a-half. This is still, Sadio Mané aside, the team that was within a week of the quadruple last season. Yet there had been a distinct sense of a cycle ending. For all the talk of refreshing the model, of changing the forward line and rejuvenating the midfield, there were eight players who started in the defeat at Arsenal last week who were there in the opening game of the Champions League campaign four years ago. This is a squad that has been through a lot together, and when that is the case, there is always the feeling that the mutual understanding that can be wrought through familiarity can battle the threat of stagnation.

But what it produced on Sunday, despite the injuries that left it with Joe Gomez at center back and James Milner at right back, was a performance of great resilience that in turn exposed that City is perhaps not quite so remorseless as it can be painted. Even Erling Haaland fails to score sometimes.

Although City dominated both possession and chances, Liverpool had its chances in the first half. Diogo Jota headed a Harvey Elliott cross over and Andy Robertson blazed over after Ederson had unconvincingly punched out a right-wing cross. There were other half-chances, crosses not quite executed, final passes not quite played—enough to encourage Liverpool and also the rest of the division. City may be an even more potent attacking force this season after the arrival of Haaland, but as Newcastle and Crystal Palace have proved, it is not entirely defensively convincing. The greater verticality offered by Haaland’s directness means there is less time to construct the barriers to counter-attacking that Pep Guardiola usually uses to establish the control on which his game has previously been based.

Liverpool maintained the 4-2-3-1 shape that had brought Champions League wins over Rangers but also the largely shambolic defeat at Arsenal last week. Salah had played on the right at the Emirates, though, whereas Sunday he operated through the middle and was far more involved that he had been in any other Premier League game this season. Fabinho returned for Jordan Henderson and he too gave by far his best performance of the season, but the greatest revelation was the Gomez-Milner axis. Milner had struggled badly against Phil Foden last season, and Gomez was awful this season against Napoli, but protected by the energy of Elliott, both were exceptional.

The game exploded early in the second half, any semblance of control gone. There was an astonishing five-minute period in which Salah, released by Firmino, was denied by a fine save from Ederson, although a goal kick was given. Foden then had the ball in the net after a heavy challenge from Haaland on Alisson, only for the goal to be ruled out for a pull by Haaland on Fabinho. With the stadium whipped to fever pitch, Jota headed against the outside of the post, although he was subsequently ruled offside. Alisson then made a fine save low to his right to deny Haaland.

The pattern was clear: city domination of the ball, Liverpool repeatedly threatening to get in behind the defensive line. The goal, when it arrived after 76 minutes, could hardly have been simpler: Alisson claimed a poor Kevin De Bruyne free kick and cleared long. Salah, making the most of an odd misjudgement by João Cancelo, far less effective than in most games this season, perhaps because he was used on the right rather than the left, took the ball down and, gifted a second one-on-one, beat Ederson.

Had the substitute Darwin Núñez been more clinical in two further breaks, Liverpool might have won more comfortably. But even as the clock ticked up to 100, City didn’t really threaten, its inspiration spent as it suffered its first away defeat in the league since the opening weekend of last season.

Clearly one game isn’t enough to say that Liverpool is back, or that City is finished, but some things that seemed certain at the start of play were perhaps less clear-cut by the end. Liverpool still has teeth, and City’s susceptibility to the counter, always its Achilles heel, looks more pronounced than ever.