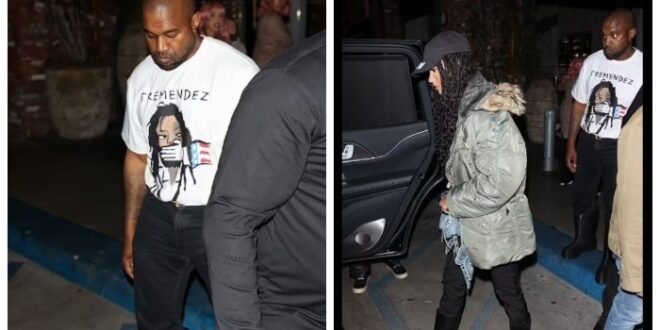 Kanye West wears a ‘Tremendez’ printed shirt during a romantic dinner date with his love interest Juliana Nalu at Beauty and Essex in Hollywood on Saturday.

The Donda rapper, 45, who has been embroiled in a lot of controversies stepped out in a white t-shirt that had ‘Tremendez’ printed on the front a moniker the Yeezy CEO gave to Tremaine.

The top featured a stylised Tremaine whose mouth is being shut by a hand with American stars and stripes.

Kanye tucked the t-shirt into a pair of black jeans and donned a pair of quirky black boots.

Meanwhile, Juliana, 24, kept a low-key figure in a black baseball cap, while bundling up in a khaki green coat.

The outing comes after Kanye shared several screenshots from an alleged ‘abbreviated conversation’ with Tremaine to his Instagram account.