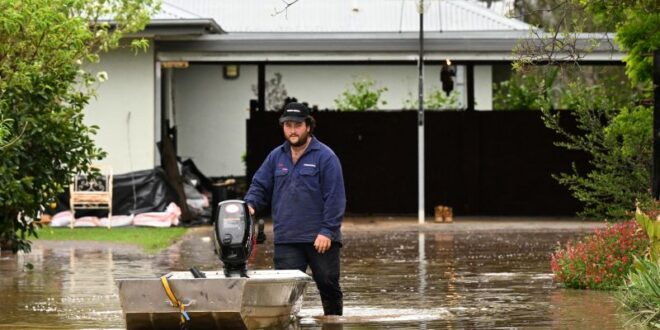 Australian Prime Minister Anthony Albanese toured flooded areas of the southeastern state of Victoria Sunday – as emergency services warned waters up to 12 meters were expected to inundate thousands of properties.

Albanese said the scenes were “devastating” on his visit to the town of Bendigo and on a helicopter ride over the town of Rochester, where a 71-year-old man was found dead in a flooded backyard Saturday.

“By the end of today over 100 ADF [Australian Defence Force] personnel will be on the ground in Victoria,” Albanese told reporters.

ADF personnel are assisting in the flood rescue, recovery and efforts to protect against the water levels expected to rise in the coming days.

Speaking alongside Albanese, Victoria state Premier Daniel Andrews said 355 roads remain closed in Victoria due to flooding and “around 6,000” properties around the town of Mooroopna remain without power.

“There is a really significant challenge there – just the amount of water and the levels it’s reaching,” Andrews said.

Emergency warnings are in effect in and around the Shepparton area, including a “too late to leave” warning for residents.

Floodwaters in that area are expected to rise to 12.2 meters, which would flood more than 7,000 properties, the Victoria State Emergency Service’s Tim Wiebusch said on Sunday.

The death on Saturday of the 71-year-old brought the number of people killed in flooding across Australia’s southeast this past week to two.

On October 11, the body of a 46-year-old man was discovered in a submerged vehicle near Bathurst in New South Wales.

Hundreds of people have been rescued already, according to Wiebusch, who has warned that more evacuation orders will be issued over the coming days.

Wild weather has battered Australia recently. The historic rainfall, brought about by La Niña conditions, has caused rivers to swell beyond their banks and left thousands homeless.

Speaking on Saturday, Andrews had said the number of flooded houses and isolated communities would “almost certainly grow as we see flooding peak.”