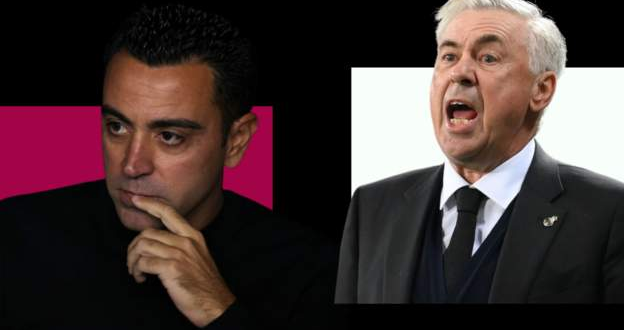 Barcelona are going into Sunday’s Clasico at the Santiago Bernabeu level on points with Real Madrid at the top of La Liga and having conceded just one league goal all season.

Eyebrows were raised when the club splashed 145m euros in the summer on players, despite well-documented financial difficulties, but at first glance the numbers would suggest the gamble was paying off on the pitch.

Statistics in football should sometimes be taken with a pinch of salt.

Their past six La Liga games, in which they have not conceded at all, have been against the likes of Real Valladolid, Cadiz, Elche and Real Mallorca – sides not known for their goalscoring prowess.

The stats will also not tell you that on numerous occasions only the stunning form of goalkeeper Marc-Andre ter Stegen has kept the opposition at bay.

It’s a different story when the bigger boys come to the party, though, and especially when you are left without your first-choice defenders to take them on.

This season, Barcelona have already conceded seven goals in four Champions League matches, losing two, drawing one and winning one.

Wednesday’s pulsating 3-3 draw against Inter Milan, loved by the neutral but loathed by Barcelona coach Xavi, probably means they will very soon have to start planning their Europa League campaign.

Inter only need to beat a Viktoria Plzen who have so far conceded 16 goals in four matches to ensure Barcelona do not qualify for the knockout stages of the Champions League for the second year in a row.

Next up is the Clasico, and Real Madrid, who in the ‘big boy’ contests are right up there with the biggest of them all.

If Barcelona lose against Real, it is going to be mayhem.

The two sides are neck and neck at the top of the table after an unbeaten start to a season that has seen them both drop just two points from a possible 24.

Something’s got to give and the clues as to where that is going to happen were there for all to see in their recent Champions League games.

Real Madrid travelled to Warsaw to face Shakhtar Donetsk and needed a last-gasp header from Antonio Rudiger to snatch a point.

Travelling to Poland with nine points already banked, there may well have been a slight element of complacency in their performance, as well as some squad rotation.

In Barcelona, Xavi rallied the forces, describing the game as a “cup final” and for the first 45 minutes everything looked like it might go to plan.

There was pressure high up the pitch, lots of crosses, shots from outside the box and players were finding each other between the lines.

All was well, certainly until half-time. What could possibly go wrong?

Well, as it turned out, just about everything really. They conceded early in the second half and then the floodgates opened.

From the moment Gerard Pique forgot to look around to the Inter attackers and the first goal was conceded, the game morphed from a measured, planned approach to box-to-box football. Pique, Eric Garcia and Marcos Alonso were never going to be able to deal with that.

The game was played by Barcelona as if there was one minute left. The match became a lottery and the best you can say is that at least two saves by Ter Stegen near the end mean that there is still the slimmest of chances going into the next matchday.

So what we have now is a Barcelona that can only do what Xavi wants for 45 minutes, a team that is fine until things become difficult and then find themselves unable to cope. A team that has two ways to think about what needs doing – Xavi wants control but the players prefer to attack quickly.

Clearly Xavi is no further than at stage one of this new educational process at the Nou Camp, which is very bad news when you are about to face a Real Madrid side that graduated with honours years ago and who know how to raise the levels when it really matters.

So what are the key elements of this Sunday’s Clasico?

Ter Stegen has helped to blunt the sharp reality of what is happening at the moment and without him it’s difficult to imagine where the club would be.

No-one is sure who will be at the other end, with Thibaut Courtois out for the past three games with a back injury and still unable to train.

Andriy Lunin has filled in for the Belgian with distinction yet somehow cannot quite inspire that match-winning, difference-making confidence that Courtois does. But then – apart perhaps from his opponent at the other end – who could?

Forget just being a goalkeeper – Courtois is one of the most influential players this season.

What about the situation in defence?

The Champions League has shown us that this is a Barcelona side that does not adjust sufficiently to the counter-attacks of its opponents. When they control the game, they are able to defend as a team, but when they revert to box-to-box football they are there for the taking.

Expect Real Madrid to occasionally defend high but concern themselves mainly with waiting for Barcelona to lose possession and counter-attack them as only they know how.

Karim Benzema, Vinicius Junior, Rodrygo, Federico Valverde or whoever happens to be playing is a frightening prospect for this brittle-looking Barcelona side because Real Madrid are one of the best in the world in that aspect of the game.

Real Madrid, meanwhile, have in defence Eder Militao, who missed Tuesday’s Champions League match but who should be fit for the Clasico. He is one of the best centre-backs around.

He is strong, physical, has fantastic anticipation, is fast, dangerous in set-pieces and resolute in defence and, while Barcelona missing defenders has cost them dear, Real Madrid have either David Alaba or Nacho to seamlessly replace the injured Rudiger.

Is Rodrygo the new Benzema?

Rodrygo is good but he is not on the level of Karim Benzema – not yet, not by a long chalk. But at least Real Madrid know that in him they have someone that can take on the role of the France striker.

He links well with his team-mates, can drag defenders away, can drop deep sometimes and can score goals. Against Atletico Madrid just before the international break, he was far and away the best player.

He can be trusted to play wide or to identify those places where he is going to create the most problems for his opponent, including sometimes the central position normally occupied by Benzema.

The key on Sunday could well be in midfield and it’s safe to assume that Real manager Carlo Ancelotti isn’t about to repeat the perverse decision he took in last year’s Clasico, when he decided to play Luka Modric as a false nine and ended up the wrong side of a 4-0 thumping.

Ancelotti will know better than anyone that playing with fast transitions fundamentally requires a midfield that holds together when under attack and then moves with pace.

This is now a Madrid side with a very strong structure and a team where everyone knows what what everyone else’s role is. They have had it for a long time now and it is second nature to them.

Barcelona, on the other hand, are doing it because it is what they have been instructed to do.

Who will get the blame at Barca?

For Barcelona, Sunday’s Clasico could be the next learning curve as they strive to find their identity. It could be a bumpy ride.

If it goes pear-shaped in the not too distant future the first to be criticised will be the players, especially the seasoned veterans such as Pique and Sergio Busquets who aren’t performing at their best. Plenty of people have started saying they are not up to playing at this level any more.

Then, depending on what happens on Sunday, next in line will be the manager who will be swiftly accused of not getting the best out of a squad that was improved with the help of around 145m euros in the summer.

And then finally, if we continue along this road, president Joan Laporta will be questioned by many for having sold off parts of the club in order to try to finance this new-look Barcelona.

But without getting the results, and maybe even titles, that will provide the prestige needed to keep bringing in money to pay debts that total around 1bn euros, the heat will only grow on Laporta.

These are delicate times at the Nou Camp.