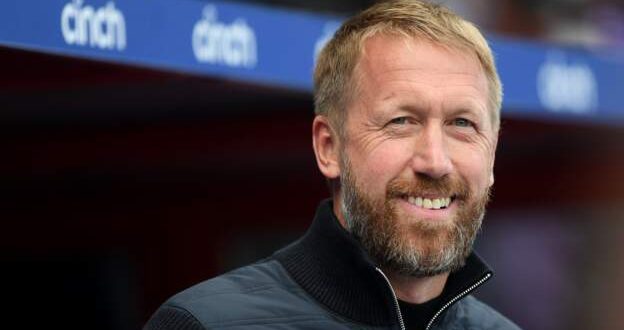 Chelsea boss Graham Potter joked that he is “growing into his face like a fine wine” when it was suggested he has had a ‘glow up’ since arriving at Stamford Bridge.

During Potter’s news conference before Chelsea’s trip to Aston Villa on Sunday, his sartorial choices were an unexpected point of discussion.

“Somebody said to me the other day that I have had a ‘glow up’,” he said.

“I have no idea what that is. I am growing into my face like fine wine.”

Potter concedes that leading Chelsea makes him more “high profile” and that his “face is unfortunately too often on the television”, but the 47-year-old still expressed surprise at social media talk of a makeover since he took over as Blues boss in September.

“I have had a haircut from somebody that cuts the lads’ hair,” added Potter, who has led Chelsea to a draw and four wins in his first five games in charge.

“So probably that has made a difference, I don’t know. It cost a lot more than I thought it was going to.”

Potter once told BBC Sport that he was resigned to never being a high-profile manager when, at the time, he was being linked with Everton.

“It is hard to be a sexy name when you are called Potter, especially if your first name is Graham,” he said.

“Add into that a long face and a ginger beard, and all the rest of it, and I just have to stick to being a football coach and work with the players.”

There has been much talk of Potter’s choice of jumper on the sideline, with his trusty black sweater drawing comparisons to the Milk Tray Man, the iconic black-clad protagonist of Cadbury Chocolate TV adverts.

Potter revealed he has been wearing a “lucky” sweater since he led Brighton to victory over Tottenham in April.

“I used to wear the polo neck. It is not a new jumper,” he added.

“It’s not that old but not new. If you check back – and I know this is not investigative journalism – I think we beat Tottenham 1-0 with that jumper so maybe it is a lucky jumper? I don’t know.

“I would like discussions about me to be a bit more highbrow than about my jumper or my haircut but at the end of the day there is 24-hour news.

“You need to fill it with something so it may as well be about my jumper.”