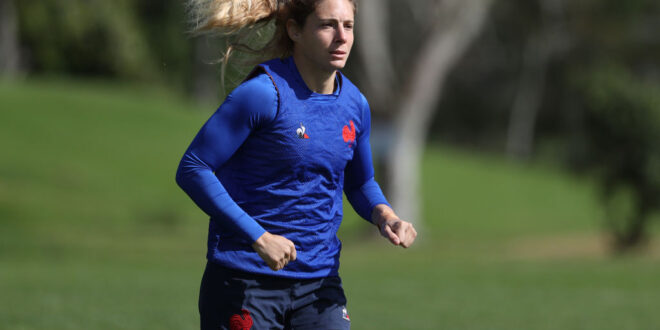 Marjorie Mayans will play her 50th Test when France face England at the Rugby World Cup in Whangarei on Saturday.

Thomas Darracq has made one change to the starting XV that beat South Africa in their opening pool match, with Agathe Sochat coming in at hooker and Laure Touye dropping to the bench.

Regular captain Gaëlle Hermet has recovered from injury to be named on the bench but Céline Ferer will continue as skipper for this fixture, with France aiming to end a ten-match losing run against England.

Laure Sansus scored the first try of the 2022 Rugby World Cup after less than two minutes of the opening game of the tournament, but France were not so ruthless in the ensuing 78 minutes.

Their own errors, coupled with the commitment and physicality of South Africa, led to plenty of fractured attacks and French frustration. They were not able to dominate the Springbok women as many expected, with their lower-ranked opponents not only halting their maul but also gaining an edge at scrum time. Those will be serious causes for concern going into game two against England next weekend.

The scoreline of 40-5 may make it look like a comfortable victory but three tries in the final 15 minutes added a little gloss to proceedings while the uncompromising nature of South Africa’s tackling means there will be plenty of sore bodies in the French ranks.

France led 19-0 after a quarter of the match, Gabrielle Vernier and Emilie Boulard crossing after Sansus’s early try, but they then had to wait 50 minutes to secure the crucial bonus-point try. It was Sansus, of course, who delivered the all-important score, sniping over from a tap penalty five metres out while Caroline Drouin burst through for a fifth try shortly after following an initial break from Romane Menager.

Debutant Joanna Grisez added a final flourish when collecting a Drouin kick to cross in the final minute, but overall it was a surprisingly below-par performance from the French and they may well rue failing to put more points on the board later in the tournament.

If a team is to win the Rugby World Cup for the first time this year, France are the most likely nation to do so.

Since their third-place finish in 2017, les Bleues have displayed their credentials on multiple occasions, but the 2018 Six Nations Grand Slam and the ongoing four-match winning run against New Zealand have been particularly impressive.

The 2022 Six Nations saw impressive performances from lock Madoussou Fall and scrum-half Laure Sansus, with the latter being named Player of the Championship.

However, Thomas Darracq’s team have been stuck in England’s shadow for the past three years. Since a memorable victory over the Red Roses in 2018, France have lost ten games in a row to their cross-Channel foes, who last lost a match (against anyone) in 2019 and are the favourites to win the World Cup.

Worse still for the French, they are in the same pool as England for the tournament. It would be quite the occasion to end their losing streak.

Even if they lose to England, they should have no trouble making the knockout stages with South Africa and Fiji their other pool opponents.

Remarkably, France have reached the women’s Rugby World Cup semi-finals in seven out of eight tournaments, but have never reached the final.

They undoubtedly have the tools to make it beyond the last four this time but, considering England’s brilliant form and New Zealand’s home advantage, France could well endure another near-miss.

Darracq selected his 32-strong squad to travel to New Zealand a couple of days after his side had suffered a shock defeat by Italy in a warm-up match.

There were some surprise omissions in wings Cyrielle Banet and Caroline Boujard and experienced lock Audrey Forlani. Joanna Grisez was a surprise inclusion too; she impressed for France at the Sevens World Cup in Cape Town, where the team won bronze, but is uncapped at 15s level.