The American Civil Liberties Union (ACLU) and other legal groups filed a lawsuit against Immigration and Customs Enforcement (ICE) on Thursday, alleging that migrants detained in four detention facilities in Florida, Louisiana, Texas and Arizona have been denied legal representation.

In the lawsuit, the plaintiffs allege that attorneys face “numerous obstacles” in attempting to communicate with detained migrants. These obstacles, the lawsuit says, make representation “extremely difficult and, sometimes, impossible.”

A Border Patrol agent walks between a gap along the border wall between the U.S. and Mexico in Yuma, Arizona, on June 1, 2022.
(Patrick T. FALLON / AFP)

The lawsuit alleges that attorneys have had difficulty scheduling legal calls and having meetings with their clients in confidential settings.

The ACLU filed the lawsuit on behalf of Americans for Immigrant Justice (AIJ), Florence Immigrant and Refugee Rights Project (FIRRP) and the Immigration Justice Campaign for the American Immigration Council (IJC), among other legal service organizations. 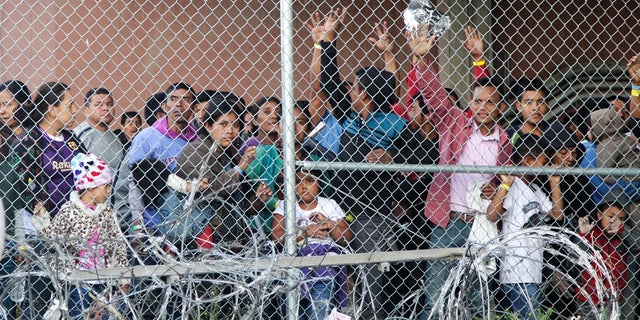 Central American migrants wait for food in El Paso, Texas, in a pen erected by U.S. Customs and Border Protection to process a surge of migrant families and unaccompanied minors on March 27, 2019.
(AP Photo/Cedar Attanasio)

“The government locks people up — often in remote facilities far from family and legal services providers — while erecting arbitrary barriers to accessing counsel,” she said. “Immigrants in detention should not have to struggle to have private conversations with their lawyers. The stakes are too high.”

Fox News Digital has reached out to ICE and the Department of Homeland Security for comment.

There have been more than two million migrant encounters at the U.S.-Mexico border in FY2022, as Border Patrol agents deal with a migrant crisis unprecedented in U.S. history and one that the Biden administration has so far failed to slow, despite its claims that the border is “secure.”