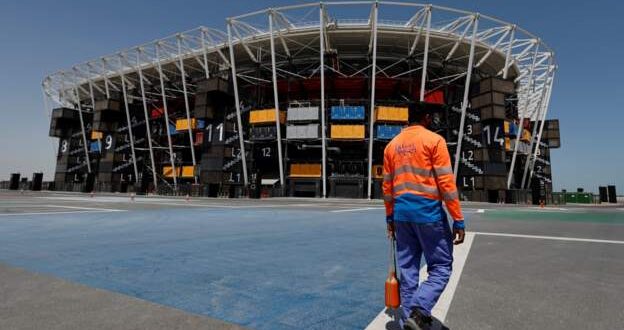 The World Cup has allowed Qatar to make progress on issues related to worker rights but there remains gaps in the country’s labour system, the tournament’s organising committee says.

Qatar has come under heavy scrutiny from human rights groups over its treatment of migrant workers.

“We embarked on this journey after we won the World Cup bid,” said Qutub.

“There was an acknowledgment at the time that gaps existed. We have demonstrated through our various ecosystems that meaningful steps can be taken to fill those gaps.”

Qutub was speaking at a public parliamentary hearing on the protection of workers’ rights in Qatar, organised by the Parliamentary Assembly of the Council of Europe in Strasbourg.

The World Cup starts on 20 November.

It is estimated up to 30,000 migrant labourers have been used on projects to build seven stadiums for the finals in Qatar, as well as a new airport, new metro and new roads.

However, human rights organisation Amnesty International says that since 2010 hundreds of thousands of migrant workers have faced human rights abuses while employed to build wider infrastructure necessary to host the tournament, as well as the venues.

“We recognise there are shortcomings,” added Qutub. “This was, after all, the reason why we pursued the World Cup bid… awarding the World Cup has done a lot of service to Qatar, the region, the globe.”

But Lord George Foulkes, who chaired the hearing, said more results need to be seen.

“The number of tragic accidents continues to run into the hundreds,” he said. “And enforcement of new rules isn’t sufficiently effective. Workers don’t have the right of assembly.”

Speaking to BBC Sport, Mustafa Qadri, chief executive of human rights organisation Equidem, expressed concern for the 20-30,000 workers he says will be flown to Qatar on temporary contracts for the World Cup.

“We have really big concerns about them,” said Qadri. “How are they being recruited? Do they get all the money owed? Will they get labour protections?

“Qatar’s issues have been in the media and people may ask why people still take these jobs. They come from some of the poorest and most remote regions in the world and are deprived people who can’t ordinarily get jobs. They are desperate people looking for a better life and don’t have a choice in the system.

“There are good people within the Qatar system and the Supreme Committee but it is a political issue as to whether they want to address it or focus on the public relations.”

Rights groups have also highlighted that homosexuality is illegal in Qatar with Amnesty International saying women and LGBTQ+ people “continue to face discrimination in law and practice”.

Norwegian Football Federation president Lise Klaveness said: “We have yet to speak about some of the elephants in the room: ensuring independent investigation of unexplained deaths.

“We demand that safety, respect and rights for LGBTQ+ persons and fundamental respect for women’s football should be non-negotiable requirements for hosting the biggest sports tournament in the world.

Nasser Al Khater, the chief executive of the 2022 World Cup, has said LGBTQ+ fans coming to Qatar would not have to worry about “persecution of any sort”, describing the nation as a “tolerant country”.