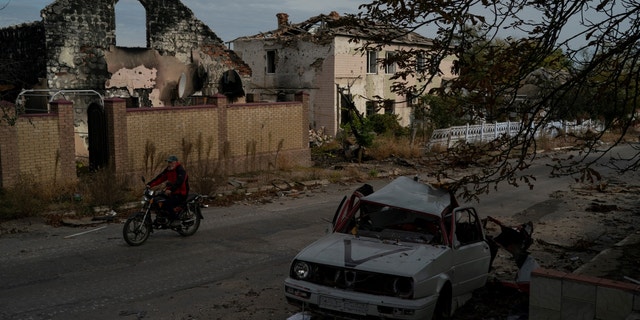 The capital region of Ukraine was hit by Iranian-made kamikaze drones on Thursday morning as the Russian military ramps up attacks against the country.

Kyiv Oblast residents woke up to blistering air raid sirens for the fourth day in a row this week. Rescue workers were seen rushing to the sites of Thursday’s strikes.

The strikes reportedly hit somewhere along the perimeter of the capital city, according to Kyiv regional governor Oleksiy Kuleba. The amount of casualties is unknown, but deputy head of the presidential office Kyrylo Tymoshenko said on Telegram that “critical infrastructure facilities” in the area were impacted.

The southern city of Mykolaiv was also hit by Russians overnight, with shelling destroying a five-story apartment building in the city.

A man drives his motorcycle past a destroyed car in the retaken village of Velyka Oleksandrivka, Ukraine, Wednesday, Oct. 12, 2022.

Mykolaiv Mayor Oleksandr Sienkovych said the building’s top two floors were completely destroyed in a single strike. The number of casualties from that attack has also not been reported.

Attacks on Kyiv were a rare occurrence before the capital city was hit at least four times during Monday’s destructive strikes, which killed at least 19 people and wounded more than 100 across the country.

The attacks come as tensions between Ukraine and Russia escalate since Vladimir Putin’s annexation of the Donetsk, Luhansk, Kherson and Zaporizhzhia regions.

TO COUNTER RUSSIA, AUSTIN PLEDGES INDEFINITE US SUPPORT FOR UKRAINE THROUGH ‘ALL SEASONS’ 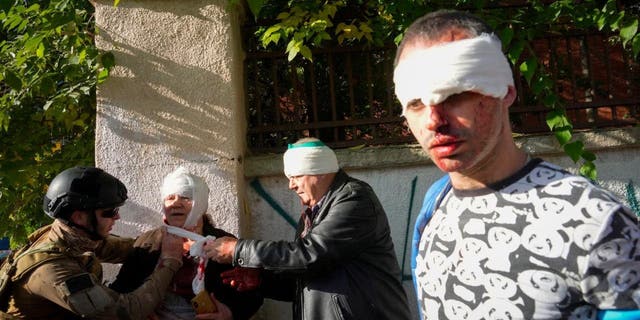 Iranian Shahed-136 drones have been increasingly used by Russia’s military to destabilize Ukraine. The Ukrainian military reported that they were able to shoot down dozens of drones and Russian missiles through air defenses this week. 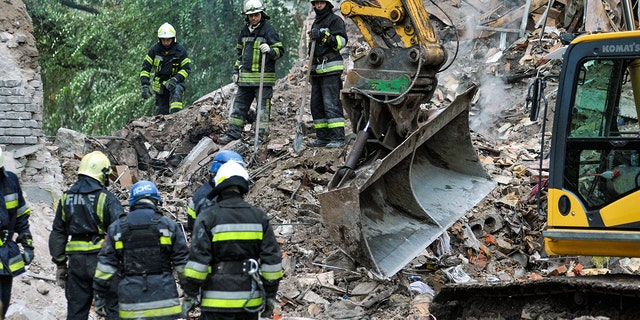 “I think he thought he was going to be welcome with open arms,” Biden claimed. “That this was the home of mother Russia and Kyiv… I think he totally miscalculated.”