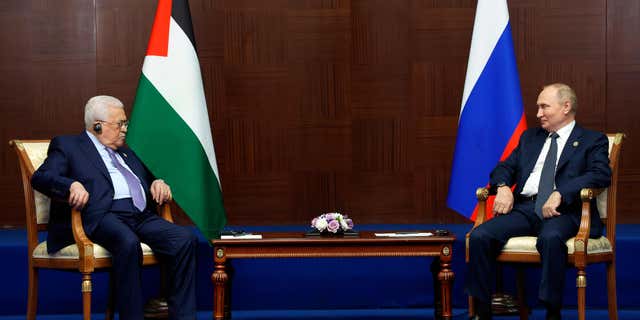 Palestinian president, in front of Putin, rules out US as Mideast peace mediator during speech

The Palestinian president on Thursday used an audience with Vladimir Putin to denounce the United States, telling the Russian leader that he has no faith in Washington as a Mideast peace broker.

Abbas spoke with Putin at a regional summit in Astana, Kazakhstan. His comments about the U.S., traditionally the main broker between Israel and the Palestinians, came at a time when the U.S. and Russia are at loggerheads over Putin’s invasion of Ukraine.

“We don’t trust the U.S.,” Abbas said, speaking in Arabic, as Putin looked on. “We don’t accept the U.S., under any condition, (as) a single party in solving the Middle East problem,” he added.

He said the Palestinians would only consider U.S. mediation if it were part of the “Quartet,” a grouping of nations that includes Russia.

With Thursday’s meeting, Abbas became one of the few world leaders to sit down with Putin since Russia launched its war on Ukraine in February. In his public comments, Abbas did not mention the war, nor did a statement released later by his office.

Abbas’ remarks reflected his frustration with the U.S., which has stepped back from its once-intense mediation between Israelis and Palestinians. Instead, it has turned its focus toward other pressing global issues like the war in Ukraine, relations with China and economic woes.

President Joe Biden has restored the funding, but kept the embassy in Jerusalem. He also has not attempted to restart peace talks, focusing instead on more modest goals such as boosting the Palestinian economy.

Israel and the Palestinians have not held substantive peace talks in more than a decade, and Israel’s military occupation over captured lands sought by the Palestinians is now in its 55th year.

The U.S. has been central to previous negotiations, brokering interim peace deals in the 1990s that created the Palestinian Authority, which Abbas leads.

Abbas’ words, however, come in what could be the waning years of his leadership.

The 87-year-old heads a weak Palestinian leadership with no real succession plans for the day the long-serving leader is gone.

The internationally recognized Palestinian Authority is committed to nonviolence and a negotiated peace agreement creating an independent Palestinian state alongside Israel.

At home, however, the authority administers a series of autonomous areas in the Israeli-occupied West Bank. It has become increasingly unpopular and is viewed as weak, corrupt and despotic.

Israel captured the West Bank, the Gaza Strip and east Jerusalem in the 1967 Mideast war. The Palestinians seek those territories for their hoped-for, independent state.