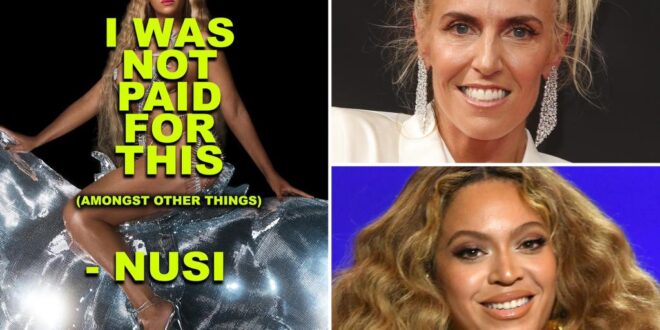 Fashion and art designer Nusi Quero called out Beyoncé’s stylist Marni Senofonte on Wednesday, claiming that he has not yet been paid for his styling work on Queen B’s “Renaissance.”

Quero listed the projects he was allegedly commissioned for in an Instagram post but redacted each effort’s likely heavy price tags.

His four projects included a “Renaissance” “album cover piece,” a variation of that look and styling for a video — plus “a red custom 3D printed top I miraculously procured last miniature for a video shoot.”

It is unclear to which Beyoncé video the alleged receipts are referring.

“As a stylist for B, I really expected the best from you and your team,” he started in the open letter addressed to Senofonte. “But since you won’t responded to texts and emails. I supposed this is the final venue I can utilize before legal means to settle your outstanding balances, that you’ve owed me and my collaborator for about 3 months.”

Quero stated that while he wasn’t the first creative behind the scenes to have this kind of issue, he doubled down that “this industry is mega f- -ky to the core and in its crevices.”

“But I’m f- -king sick of independent designers like me being treated like this, we are so often the last to get paid, the last to suck on the wet dirt after everyone dries up the rivers that flow from our springs. We are the source. The work I do is next level. It is so fiscally undervalued for the placements it’s had it’s astounding.”

“Please pay to me or Rio,” he added, presumably referring to his collaborator. “You have both of our correct banking information in your emails but I think you should drop off a check.”

Quero ended his Instagram carousel with a lyric from Beyoncé’s “PURE/HONEY” that reads, “Don’t be funny with my money, honey.”

He later added to his Instagram Story that he spoke out for two reasons: “Because I literally just need to get paid and we were ghosted completely” and “because this s- -t has to change.”

In another clarification, Quero added, “Marni paid a 50% deposit to me for one of the 3 jobs, (not the album cover), nothing more, and it took over a month to get it to us.”

He did admit that there was one quick issue with the bank but it was immediately corrected.

A deposit for one of the jobs came a month later but 2 1/2 invoices “have been put off and ignored ever since,” Quero claimed.

“This is about how I was late paying rent for two months. This is about my card getting declined for an oil change on my 2001 Toyota Camry with 270k miles on it while my unpaid work is being seen by billions of people, uncredited. This is about artists getting paid and respected,” he added.

The Post has reached out to reps for Beyoncé, Quero and Senofonte.

Shortly after the release of “Renaissance” in July, Kelis called out Beyoncé for allegedly using a sample of her classic 2003 song “Milkshake” on “Energy” without her permission.

Although Queen B did credit her in the song’s credits, Kelis said no one from Beyoncé’s camp reached out to double-check that the sample was okay to use.

Instead of publicly addressing it, Beyoncé quietly removed the Kelis sample from “Energy.”