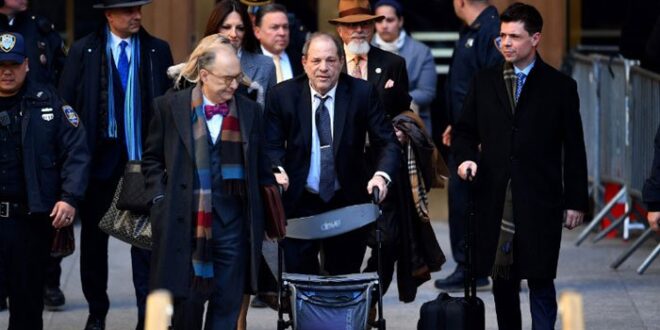 Harvey Weinstein held in ‘medieval’ conditions ahead of court: lawyer

Los Angeles: Disgraced movie mogul Harvey Weinstein is being held in appalling conditions in a cell as he awaits his daily trial sessions in Los Angeles, his lawyer said Tuesday.

The “Shakespeare in Love” producer, who once dominated Hollywood, is on trial for multiple counts of sexual assault against five women between 2004 and 2013.

If convicted of the crimes, which he denies, he could be jailed for more than 100 years, in addition to the 23 years he is already serving for crimes committed in New York.

On the second day of his trial in Los Angeles, where the court is trying to whittle down a large pool of potential jurors, lawyer Mark Werksman said conditions in the holding cell where the wheelchair-using Weinstein is kept before the court convenes were “unsanitary, fetid.”

“It´s almost medieval, the conditions. I´m concerned about his health and his ability to survive this ordeal… without a heart attack or stroke,” Werksman told the court. “He´s 70 years old.”

Judge Lisa Lench said she would talk to sheriff´s deputies, who are in charge of detaining Weinstein while he is on trial.

“I´m not minimizing it. I´m just not sure there´s a lot to be done,” Lench said.