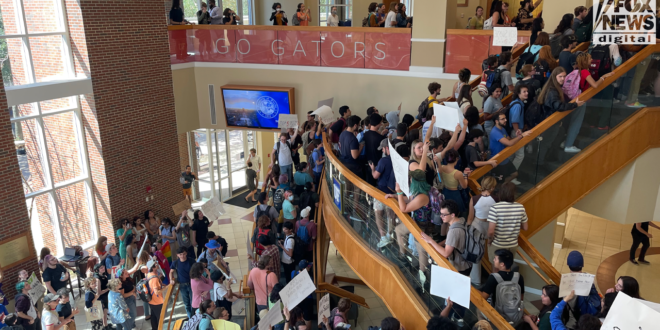 College students organized a protest in response to their university’s nomination of a sole finalist for president of the school. The University of Florida announced on October 6 that Senator Ben Sasse, R-Neb, was unanimously nominated to be the only contender to serve as the 13th president of the public institution.

Sasse, who has served the state of Nebraska since 2015, is expected to resign his Senate seat in December and start his new job at the university in February, should the nomination go through.

SASSE EXPECTED TO RESIGN SENATE SEAT, LIKELY TO BE NEXT UNIVERSITY OF FLORIDA PRESIDENT

He was on campus on October 10 for multiple public forums with students, faculty, and staff. Sasse spoke at Emerson Alumni Hall at 2:30 PM during a Q&A session for students. Students were given the opportunity to submit questions before the event.

University of Florida students protested the nomination of a Republican senator to be their school’s new president.
(Fox News/Ophelie Jacobson)

“Ben Sasse is on the record anti-gay marriage, anti-transgender people and anti-abortion. He poses a threat to all students that may be queer or non-men,” one student said. “I’m worried that it might be even harder for students to get an abortion.”

Another student said “his views are very right-wing, really far right,” adding that he is “not a high character individual.”

“I think that he lacks the experience to lead a university as big and prestigious as the University of Florida,” one student said.

Other students said his stances on climate change and the overturning of Roe v. Wade concerned them, as well as his ability to “unite” the university population.

The protest started outside, but students gradually made their way inside the building and stood outside the room where Sasse was speaking. Their chants of “Ben Sasse has got to go” could be heard from inside the room.

Students said their school spirit would decrease if Sasse were to become president of the university.

One student told Fox News Digital, “If this goes through, I’m not going to be proud to be a Gator. And I’m worried that this might affect our rankings.”

Another student said she has been “embarrassed to be a Florida Gator” because “it’s been clear for a while now that Governor DeSantis and the Florida legislature want to destroy public education.”

After Sasse finished speaking and exited the space, students swarmed the empty room and stood up on the stage continuing their chants. Leaders of the event said they wanted to “make his life miserable.” At one point, a student called him a “homophobic piece of sh**.” 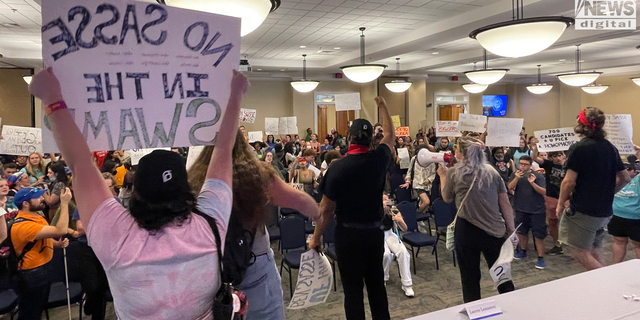 Students swarmed the room where Sasse was speaking after he left the area, jumping on the stage and continuing their chants.
(Fox News/Ophelie Jacobson)

Students argued the campus dynamic would change if Sasse were to become president.

“I worry very much about the most marginalized on campus and whether or not they’ll feel like UF is still a safe space for them.”

Another student echoed the same concerns.

“I feel that a lot of marginalized groups on campus will feel less safe and less secure,” she said.

However, one student admitted he was “able to be won over” saying he was at the event “to see what he has to say.” 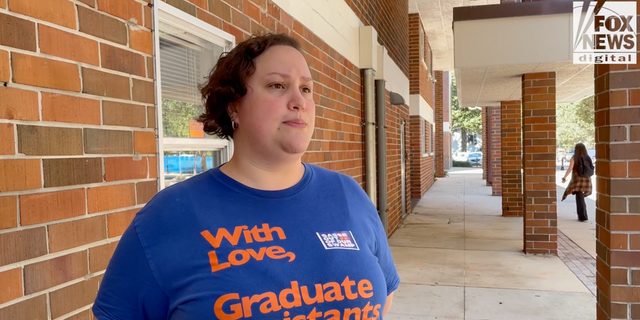 Multiple student groups organized the protest outside the building where Sasse was participating in a Q&amp;A session with students.
(Fox News/Ophelie Jacobson)

Shortly after the event, UF Graduate Assistants United tweeted a video of what appears to be Sasse leaving the building via a police car.

The organization tweeted, “This is what a coward looks like. This will be your life every day if you accept a position here.”

Sasse voted to impeach former president Donald Trump during his second impeachment trial in 2021. Prior to serving in the Senate, Sasse spent five years as president of Midland University and taught at the University of Texas at Austin.

Fox News reached out to Sasse’s office for comment, but has not heard back yet.