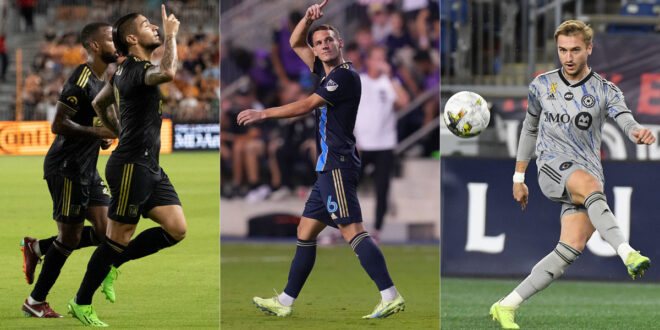 MLS’s 14-team playoff picture is set following another dramatic Decision Day, and while some of the major developments and the majority of the playoff berths had been sorted long before Sunday, there was still room for intrigue on the final day of the season.

The big news is out west, where after seven straight years of either the Portland Timbers or Seattle Sounders making MLS Cup, the Western Conference will have a new entrant in the league’s final. Seattle’s 13-year run—its entire MLS existence—of making the postseason had been snapped before Sunday’s finale, but Portland’s omission from the playoff field was confirmed following a 3–1 defeat to Real Salt Lake, which leapfrogged the Timbers into the single-elimination run for the Cup by a single point (RSL needed Decision Day heroics to reach the playoffs last year, too).

Other drama was reserved in the east for U.S. Open Cup champion Orlando City, which denied Columbus a playoff berth and cemented one of its own on Facundo Torres’s 84th-minute penalty kick.

Here’s the MLS playoff picture following the conclusion of the regular season—along with what may be in store for select U.S. internationals whose teams didn’t make the playoffs and are facing a lengthy period of down time before the World Cup (all times Eastern).

The Union finished the season in style, with a 4–0 rout of Toronto FC ensuring that their 72 goals and +46 goal differential were tops in the league. They also capped an unbeaten run at home (12-0-5) and won’t have to travel unless they reach MLS Cup and it happens to be a top-seed showdown hosted by LAFC (which would be a rematch of a thrilling May encounter that ended 2–2).

Montreal is a worthy challenger, though, winner of eight of its last 10 matches—a mark that bests any other playoff contender. No. 3 seed NYCFC remains the defending champion and goes into the postseason on a high, winning three on the bounce to enter with momentum after initially struggling to overcome the midseason losses of its manager (Ronny Deila) and best player (Taty Castellanos). It does have the ignominy of hosting its first playoff match at Red Bull Arena due to the Yankees’ involvement in the MLB playoffs—though the Mets’ elimination Sunday night should make Citi Field a viable option going forward if NYCFC progresses beyond a Miami side that is playing inspired by the final days of Gonzalo Higuaín’s storied career.

The Red Bulls’ consistency of making the playoffs—13 straight seasons—is to be commended, but plenty of credit also must go to its first-round opponent, FC Cincinnati. After three straight years of finishing with MLS’s worst record, it’s a wooden-spoon club no more. Loser of just two of its last 19 games (there were 11 ties in there, for what it’s worth), FCC was the second-highest-scoring club in the East—although its defense is tied for leakiest in the 14-team postseason—and played the Red Bulls to a pair of 1–1 draws in the regular season.

A year after none of the California or Texas clubs made MLS’s postseason, it’s rather telling that four of them occupy the top four seeds in the conference.

LAFC stumbled a bit to the finish line, recovering some from a three-game losing streak to finish the season on a 3-2-1 run, but it remains the Supporters’ Shield winner for the second time in four years and faces the possibility of a playoff edition of El Tráfico in the conference semifinals, should the Galaxy prevail over Golden Boot winner Hany Mukhtar and Nashville SC. The Galaxy are making the most of new arrival and Barcelona product Riqui Puig, but they haven’t beaten a playoff-caliber team since a July 4 pasting of Montreal, going 0-3-2 in such encounters.

The other half of the bracket is rather fascinating, with the two Texas sides on a potential crash course for a conference semifinal meeting of their own unless Minnesota and Real Salt Lake, both of whom were in poor form and clinched berths on Decision Day, can spring upsets. The Loons had lost five of six before ending Vancouver’s postseason hopes with a 2–0 win, while RSL was winless in five before sending Portland to an early offseason.

For U.S.-eligible players on the 14 clubs that missed the playoffs, there could be a silver lining, at least on an individual level. Gregg Berhalter has been planning on providing an extra opportunity for MLS-based players who missed the postseason to gather in a U.S. camp later this month (location and dates have not been revealed yet). It’s not so much rewarding poor team performance as much as it is being practical and realistic about the shutdown period these players would be facing otherwise. More than a month separates MLS Decision Day and the U.S.’s World Cup opener against Wales, and for any player serious about contributing in Qatar, sharpness and match fitness are going to matter.

“With some of the MLS players, it becomes even more tricky because the season ends October 9, and if their teams don’t make the playoffs, now it’s a whole other opportunity to work with the guys in October, keep them fit, maximize their fitness levels and hopefully play some games. So we’re planning an October camp as well for that group of players that won’t be playing soccer then,” Berhalter said in September, ahead of his last U.S. gathering.

For the most part, Berhalter’s worst fears should be allayed, as those in MLS who are firmly in the USMNT picture largely made the postseason and will play on. A quick glance at the clubs that missed the playoffs could yield a U.S. camp that involves players like Chelsea-bound Chicago Fire goalkeeper Gaga Slonina; Sounders veterans Cristian Roldan and Jordan Morris; Portland midfielder Eryk Williamson; Atlanta right back Brooks Lennon; Colorado forward Gyasi Zardes; and San Jose attacking standouts Jeremy Ebobisse and Cade Cowell, with the possibility that other players eliminated early could feasibly join, depending on the dates and logistics involved. Some who get called into camp are going to be significantly closer to the 26-man World Cup squad than others, but it’s still a bonus audition for those further from the cut line who are trying to give Berhalter some late decisions to make.