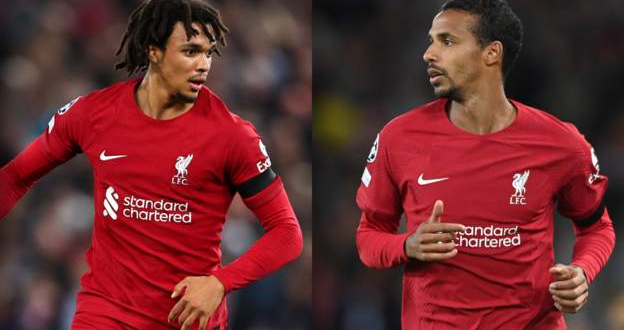 Liverpool: Trent Alexander-Arnold & Joel Matip out for up to three weeks

Liverpool defenders Trent Alexander-Arnold and Joel Matip are expected to be missing for up to three weeks through injury.

Both England right-back Alexander-Arnold – who has an ankle injury – and centre-back Matip, who has a calf issue, came off at Arsenal on Sunday.

Winger Luis Diaz has been ruled out with a knee injury – also picked up against Arsenal – until December.

Liverpool lost 3-2 to the Premier League leaders at Emirates Stadium.

The result leaves the Reds in 10th place, 14 points off the top after winning just two of their opening eight Premier League matches.

Jurgen Klopp’s side have six matches scheduled between now and the end of October, including a home match with champions Manchester City on Sunday (16:30 BST).

They are already without midfielders Arthur Melo, Alex Oxlade-Chamberlain and Naby Keita with thigh injuries, while defender Andrew Robertson has a knee problem.

Curtis Jones is back in training after a calf issue and could return against Rangers in the Champions League on Wednesday.