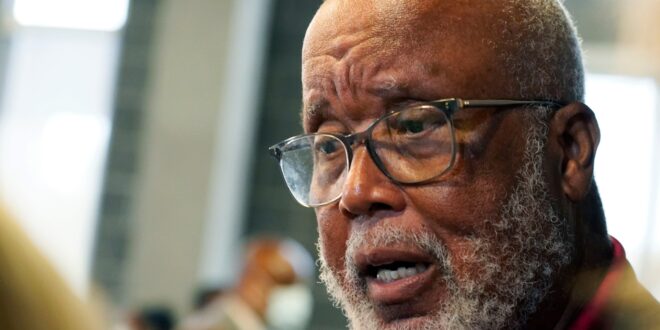 Capitol Hill Police investigated a “suspicious substance” that may have arrived to the Capitol in a letter addressed to J6 Committee Chairman Benny Thompson, D-Miss.

CHP officials reportedly called for those in the building nearby Thompson’s office to shelter in place while the substance is investigated. The incident comes just one day before Thompson is scheduled to preside over the 10th January 6 Committee hearing.

She added that officers had blocked off the hallway around the representative’s office.

REP. BENNIE THOMPSON FILES CIVIL LAWSUIT AGAINST TRUMP FOR JAN. 6 RIOT: ‘WE MUST HOLD HIM ACCOUNTABLE’

AG GARLAND REFUSES TO RULE OUT PROSECUTING TRUMP FOR JAN. 6

Capitol Police later confirmed that there was no dangerous substance discovered.

“This afternoon Congressional staff inside the Rayburn House Office Building reported that they received a letter with concerning language. We just screened it and determined it not to have anything dangerous inside. Powder was not found inside,” the statement read.

“Our investigators take all concerning statements and threats seriously. They are now working to determine who sent the letter and why,” it continued.

Send tips to [email protected], or on Twitter: @Hagstrom_Anders