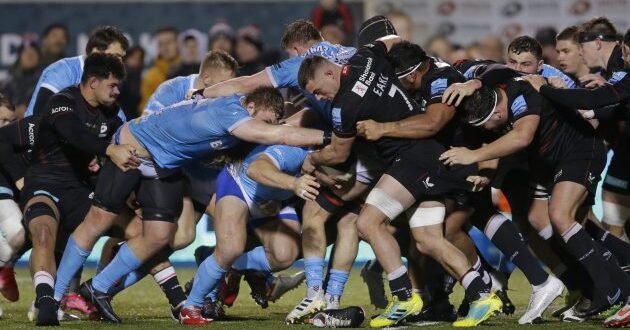 Analysing maul tries in the Premiership

With the help of Oval Insights, we look at the volume of Premiership tries that have been generated from a driving maul this season and last

Analysing maul tries in the Premiership

The driving lineout is one of rugby’s biggest weapons. Some teams found their attacking philosophies in the furnace of the maul.

And last season, we saw hookers in the Gallagher Premiership feasting on try-scoring opportunities created there, with Newcastle’s George McGuigan and London Irish’s Agustin Creevy in the top ten try-scorers for the season. McGuigan already has four this term, as does Bath’s Tom Dunn.

So we thought we’d look at maul tries, with the help of the team at Oval Insights.

With their data, we can see every try that began with a maul last season and so far this one, going from the classic pushover to as far as four phases after the initial drive, to see a volume of scores with foundations laid by the big boys up front.

Last season 360 tries in the Premiership originated from a maul. On two occasions there were also tries that were scored from mauls created a few phases into an attacking set, but we’re interested in the genesis.

And grunting out in front last season were Gloucester, who scored the most tries with the maul as their starting play, with 46. Leicester got 39, Saracens 38 and, surprisingly, London Irish scored 34.

Of Gloucester’s 46, 20 of those were scored direct from the maul. Pushovers. Sarries were next on that list, with 14.

Falcons and Saracens go at it (Getty Images)

And while they also scored five tries from four phases after the first drive, they had zero from three phases later. In fact, Gloucester were bottom of the list in the whole league for average phases post maul that ended in a score, at 1.333 – which points to a very distinct identity.

Equally as interesting was the fact Worcester Warriors had the highest rate of phases post maul (3.54) and the lowest number of tries beginning from a maul last term (14). This talks to their lack of cutting edge last season, needing to work much hard to get over the line.

Gloucester also scored the most ‘same phase tries’ – so if the maul isn’t a direct pushover score, the ball is worked immediately out of that nudge to someone who goes over from, say, a one-out pass, a few flicks down the line or from a crossfield kick directly. With the forwards tied into the maul, Gloucester did this 14 times last season, compared to Wasps’ 12 or Saracens’ and London Irish’s 11.

If you add up direct tries and ‘same phase’ scores, Gloucester led the way for the season with 34 while Saracens were the closest to them with 25. The Cherry and Whites worked very hard on making their maul a bulldozer, if not scoring directly then at least creating scores soon after.

There were 15 penalty tries from mauls all of last season and, you guessed it, Gloucester topped that list, with four. Tigers, Irish, Falcons and Saints all got two apiece.

Looking at efficiency from a different angle, it’s also noteworthy that Exeter were by far the least successful for mauls ‘won outright’ (as in keeping hold of the ball to score after working it away from their own maul), with just nine scores that way. That gets added to their seven pushovers and one penalty try there.

It’s also worth noting that Exeter’s total 17 tries from a maul start equalled Bath’s total last term, which was the joint-second lowest return for scores beginning with a shunt. You’ll see why that is interesting now…

So far this season there have been 68 tries with a maul origin, 20 of which have been pushovers.

And Johan van Graan’s Bath lead the way for maul-founded tries so far, with ten tries starting from a driving maul. That includes five pushovers and two from the same phase. 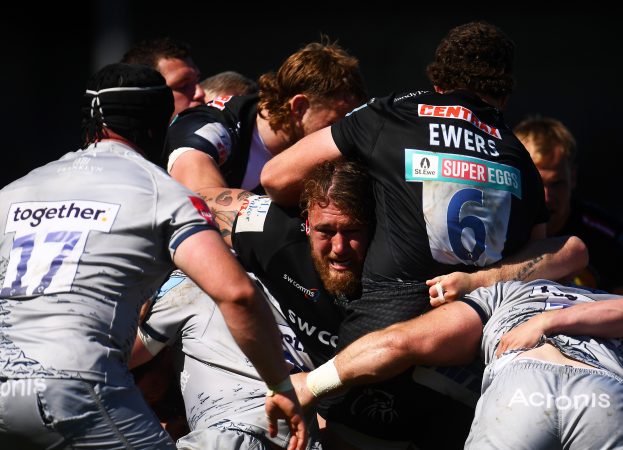 The strain shows during an Exeter Chiefs maul (Getty Images)

They are two ahead of Gloucester this season, with their historic rivals on eight just now, though the Cherry and Whites have the season’s only penalty try for a driving maul so far.

Tigers, meanwhile, are bottom of the list (once you take Worcester out of the equation) with just three tries from maul starts. Only one of those scores was a direct pushover.

Saints and Wasps have no pushover tries to their name yet this season. Wasps do lead the way for keeping it alive, however, with the most tries four phases on from passages that started with a maul (three).

What is intriguing to see is how Leicester and Bath seem to have transformed approaches over the break, with the Tigers not seeming nearly as hell-bent on drives to score, while Bath have trended in the other direction entirely. Considering Bath’s recent uptick in pressurised kick receptions, there is a clear identity Bath’s new boss wants to forge.

Gloucester, though. They appear as smitten with the maul as they were last time out.

All data provided by Oval Insights.