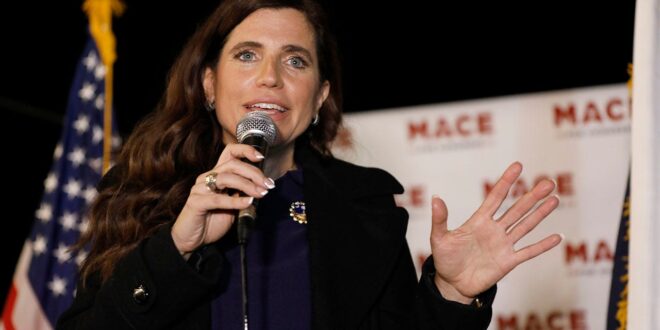 Rep. Nancy Mace, R-S.C., is accusing her Democratic opponent, Annie Andrews, of “ducking” what she says was her past support for gender reassignment surgery for minors, citing the latter’s opposition to a bill in the South Carolina legislature that would have banned such procedures.

In an exclusive interview with Fox News Digital, Mace expressed shock that, as a mother, someone would, according to her, support things like castrations and double mastectomies being performed on children, as well as allowing biological boys to participate in girls’ sports.

“My opponent is running and ducking from her public comments in March of 2021. My opponent very publicly, as a pediatrician and as someone who brags about her, quote, political advocacy work, stated not once but twice that she was opposed to a very specific piece of legislation in the state of South Carolina. It’s H. 4047 that would ban a very permanent, irreversible sex change surgery in minor children,” Mace told Fox.

“She called the legislation to ban that kind of surgery dangerous. She called that legislation an attack on our youth. And it wasn’t until we called her out on it that she decided that she’s now not for something that she was very publicly in support of just last year. And so it’s really hard to play hide and seek from your public comments, because once you tweet it, it’s on their public record forever. And that’s how we discovered it,” she added.

The state House bill Mace referenced, H. 4047, officially called the SC Minor Child Compassion and Protection Act, is a bill that would “prohibit the performance of a medical procedure or the prescription or issuance of medication, upon or to a minor, that is intended to alter the appearance of the minor’s gender or delay puberty, with exceptions; to create criminal penalties; and for other purposes.”

Andrews posted her opposition to the bill on Twitter in March 2021, stating that it would “criminalize providers of evidence-based gender affirming care,” and that it was “dangerous.”

She claimed last month that Mace’s recent attacks against her over the bill were “bigoted,” referencing the latter describing “gender affirming therapy” as “child abuse” in a post on Twitter.

“The most dangerous kind of politician is one who is worried for their political life. And Nancy Mace must be absolutely terrified of losing in November. I knew politics would be ugly but I never thought I’d see the day when my own congresswoman would accuse me – a pediatrician for over a decade – of ‘child abuse,'” she said in a statement.

Andrews went on to say that she does “not support gender affirming surgery for anyone under 18,” and that the hospital at which she’s employed doesn’t perform any such procedure. She added that she has treated “transgender teenagers who have attempted suicide because of ridicule, harassment, and ostracization.”

THE RIGHT TO LIFE AND WOMEN’S RIGHTS CAN BE PROTECTED TOGETHER: REP. NANCY MACE

Andrews also claimed that, because of Mace’s criticism, she was taking an unpaid leave of absence “in order to protect myself and my colleagues.”

While speaking with Fox News Digital, Mace referenced reported instances of hospitals performing gender reassignment treatment on minors, and said she was “appalled” as a mother to be running against someone who “supported” those things by opposing the bill.

“It included things specifically like castration. The bill would have included a ban on double mastectomies on girls, for example. And I don’t know how you can operate as a pediatrician and then come out and publicly support those things. Those things are just – I just don’t understand it. It’s part of what’s going on with the extremism of the left,” she said.

“You saw President Biden recently talk about Title IX, including biological men in girls’ sports. That’s something else that my opponent supports. But these kinds of things are really harmful to our kids … and I think most people would consider it child abuse,” she added.

Mace then blasted Andrews’ claims that she was taking a leave of absence from her job for safety reasons.

“I find it ironic because in August of this year, just a few weeks ago, she admitted publicly that she had already taken a leave from her work, that she wasn’t working very much, according to her words. And so to take a leave of absence after you’ve publicly already stated you’re not really working that much anymore is dishonest. It’s not truthful,” she said.

“My opponent has stated my name hundreds of times, attacking me online, on social media, since she announced her run for Congress just under a year ago. And she has stated things that just aren’t truthful,” she said.

“She has attacked me as a victim of rape about my work to protect women who’ve been raped. And you can’t come out and say, you know, woe is me after you’ve been attacking me negatively for almost a year, saying my name repeatedly on social media. And then the first time I say your name literally cry foul, literally show up to an event in tears and then say, I put your life in danger. I have not. It would never do that,” she added.

Mace went on to say that should Republicans win control of the House of Representatives in the November midterm elections, she would like to focus on a solution to addressing children’s mental health, including those experiencing gender dysphoria, by making sure they had access to proper services.

She said that they would, however, draw a line at things like “permanent, irreversible surgeries.”