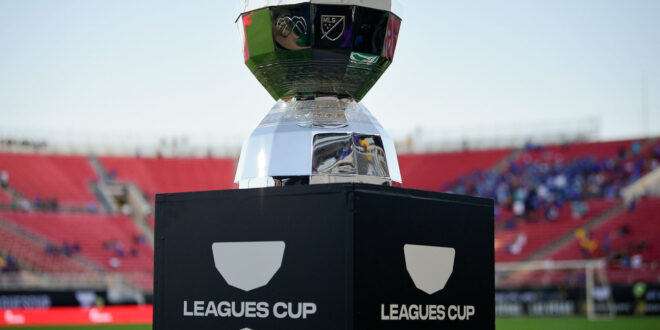 The enlarged, official Leagues Cup tournament, which will comprise all 47 clubs in MLS and Liga MX and send the top three finishers to the Concacaf Champions League, will kick off July 21 with a 45-team group stage. The month-long competition will require an unprecedented pause in both MLS and Liga MX schedules and will conclude with the third-place game and final on Saturday, Aug. 19.

Each of the 77 Leagues Cup matches will be played in the U.S. or Canada.

MLS unveiled some details of the format Thursday. The Leagues Cup concept was introduced initially in 2019, and the first two editions were eight-team exhibition events won by Cruz Azul and León (the 2020 tournament was canceled). A series of inter-league friendlies was scheduled this year as MLS and Liga MX looked ahead to the full, 2023 rollout. Next year’s Leagues Cup will be inclusive and sanctioned by Concacaf, which will conduct an expanded Champions League starting in spring 2024.

The 2023 Leagues Cup group stage will feature 45 teams placed into 15 groups of three clubs each. The 2022 MLS Cup champ and one Mexican side, either 2022 Clausura winner Atlas or the 2022 Apertura titlist (based on better combined record), will earn byes to the knockout round of 32.

Groups will be populated as follows:

—The top 15 MLS clubs in the 2022 overall league standings (not including the MLS Cup champ) will be seeded separately across the 15 groups.

—The remaining 13 MLS and two Liga MX clubs then will be drawn into groups under unspecified geographic parameters (MLS said the groups will be “divided into four regions.”)

The top two finishers following a three-game round robin will advance. The Leagues Cup will feature shootouts following tied games, with the winner receiving an extra standings point. It’s a wrinkle similar to the one FIFA has contemplated for the 48-team 2026 World Cup, should the initial plan to use three-team groups in the U.S., Canada and Mexico remain in place.

The schedule, sites and additional details will be announced “in the coming months,” MLS said.

The 32-team knockout stage will be contested with a fixed bracket and end with the third-place game and final. There was no information available Thursday on how knockout sites or home teams would be determined. Matches featuring two Liga MX clubs will be played at neutral stadiums in the U.S. or Canada. If any of the top three Leagues Cup finishers also qualifies for CCL via MLS, Liga MX or U.S. Open Cup play, the berth will revert to that given team’s league and be filled by the unqualified club with the best regular season record.

One Leagues Cup complication: Clubs exiting from the group stage or round of 32 theoretically could have three weeks without a match ahead of the regular season stretch run. They’ll have to manage how they use that time, perhaps by scheduling scrimmages against other eliminated sides.