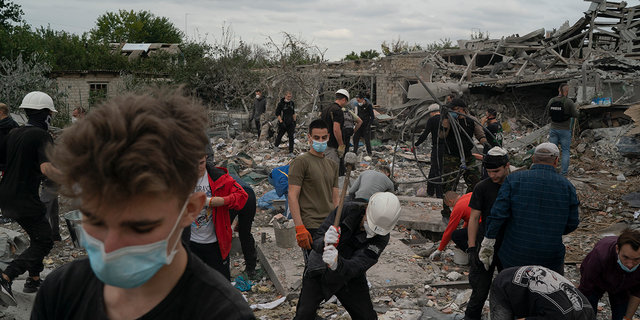 Two explosions struck Kyiv, Ukraine, early Monday after months of relative calm in the capital of the eastern European nation.

Missile strikes appeared to cause the explosions in Kyiv.

Kyiv Mayor Vitalii Klitchko said explosions occurred in the city’s Shevchenko district, which is a large area in the center of the city that includes the historic old town and several government offices.

Volunteers work to clean the debris on a site where several houses were destroyed after a Russian attack at a residential area in Zaporizhzhia, Ukraine, Sunday, Oct. 9, 2022.

No casualties have been reported so far.

Recent fighting amid the country’s war with Russia has centered on the regions just north of Crimea, which includes Zaporizhzhia, where six missiles were launched overnight Saturday from Russian-occupied areas of the Zaporizhzhia region.

Russian President Vladimir Putin claimed Sunday that the attack damaging the large bridge linking Russia to its annexed territory of Crimea was “a terrorist act” from Ukrainian special services.