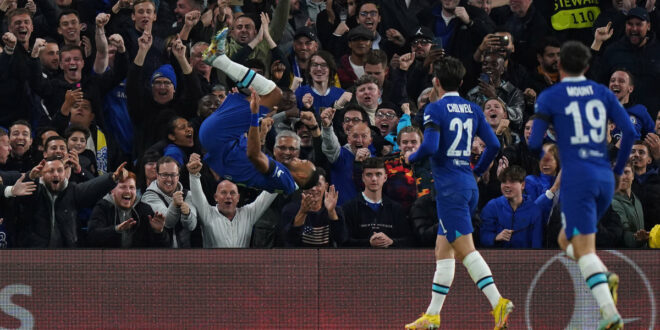 Everybody at Stamford Bridge can take a breath. The Graham Potter era is properly underway and Chelsea’s 2022-23 Champions League campaign has finally got started. An emphatic 3–0 victory over AC Milan was important in lifting Chelsea to second in the group, but perhaps also in helping to dispel some of the doubts lurking in certain quarters about Potter’s credibility—although whether a win over an AC Milan side playing as badly as this means much is another issue.

There was real pressure on Chelsea at kickoff, heightened by RB Salzburg’s 1–0 win over Dinamo Zagreb earlier in the evening. The defeat in Croatia the day before Thomas Tuchel’s dismissal and then a draw at home to Salzburg in Potter’s first game in charge meant Chelsea really had to get a minimum of four points from its double-header with Milan or face risking a three-point gap to second in the group with two games remaining. The harder part of that job is done, although Milan will surely not be this insipid at San Siro next week.

After an unconvincing win away to Crystal Palace on Saturday, there was need perhaps as well for a dominant performance to kickstart the Potter era. Given Potter had never been involved in the Champions League before taking the Chelsea job, there was clear potential for embarrassment against a manager as experienced as Stefano Pioli. But, hampered by a number of absentees, once the game had settled, Milan found itself outplayed.

It didn’t help that Milan looked vulnerable at almost every set play. Ciprian Tătărușanu, deputizing for the injured Mike Maignan in goal, offered little command of his box, while Ismaël Bennacer was out-jumped three times in quick succession by Thiago Silva. On the third occasion, although Tătărușanu parried the header, Wesley Fofana was able to slide home his first Chelsea goal amid the melee. Fofana, whose final season with Leicester was ruined by injury, was then forced off before halftime with what appeared to be a knee problem.

That drew Milan out, but the result was merely that Chelsea began to cause chaos on the counter, something Milan never began to address. Potter, after his experiments with Raheem Sterling in a strange defensive winger role, opted for a straightforward back three. That meant Reece James as an orthodox right wingback, from where he rampaged forward, linking well with his England teammates Sterling and Mason Mount, who were deployed in what were effectively inside-forward roles behind Pierre-Emerick Aubameyang.

Mount in particular, after a difficult start to the season, has begun to return to his best form, which should restore some creativity to a team that has lacked it at times. He had one inventive hooked finish ruled out for a tight offside, and threatened with a couple of other first-time shots similar to the one with which he scored for England against Germany last month. That low, sweeping right-footed technique could become a happy feature for both Chelsea and England.

One run from Rafael Leão in the final minute of the first half, culminating in Rade Krunić having a shot deflected over an apparently gaping net, showed the threat Milan could pose, but just as the thought was beginning to crystallize that Chelsea was not looking quite so comfortable in the second half as it had in the first, more dreadful defending gifted Potter’s side a second.

Ben Chilwell’s overhit cross should have been an opportunity to clear, but James—one wingback to the other—had time to measure his cross. With Fikayo Tomori drawn hopelessly to the near post, Aubameyang had a simple task to volley in his second goal for the club. If defending was bad, that for the third was even worse. Almost at walking pace, Chelsea picked its way through and, when a challenge did come in, Sterling gathered the loose ball and laid in an untended James to slam in his second of the season.

Chelsea still has to go to Milan and Salzburg in its next two games, neither of which will be easy, but it ended the night in a far more comfortable position to that in which it began it, a point behind Salzburg and level with Milan but with a better goal-difference than either. The immediate threat of elimination has begun to recede. Milan, meanwhile, must face up to it: Without a big improvement next week, it could find itself on the brink.

Previous Luis Diaz: Liverpool forward expected to be out until December
Next Scientology gets a spotlight in the Danny Masterson rape trial