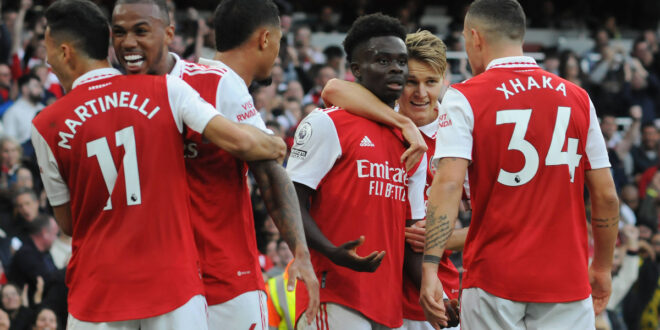 Perhaps this Arsenal really is Manchester City’s most serious challenger for the Premier League title. It returned to the top of the table, a point clear of the champion, with a 3–2 win over Liverpool, but what felt significant was less the result or the performance than the fortitude it showed to keep going in a game in which it twice let leads slip.

For Liverpool, meanwhile, there was more frustration and more disappointment. It now trails Arsenal by 14 points—admittedly with a game in hand—and looks as confused as it ever has under Jürgen Klopp. This was a slightly odd game, scrappy in parts, brilliant in others, thoroughly engaging throughout, and yet for all the twists and turns there was little disguising Arsenal’s superiority. Even last season, as Arsenal began to rise under Mikel Arteta, the thought that the gulf between the sides could be so vast so soon would have seemed absurd.

Klopp stuck with the 4-2-3-1 shape he had used in the 2–0 Champions League in over Rangers on Tuesday, a shape that, in theory, offers greater defensive solidity than the 4-3-3 Klopp has habitually used, with the double pivot of Jordan Henderson and Thiago Alcântara protecting the back four and the fullbacks, relieved of the burden of offering attacking width, able to play a little deeper. Trent Alexander-Arnold not merely scored against Rangers but seemed comfortable against the Rangers left side of Ryan Kent and Borna Barišić. Perhaps this, the theory went, was the solution to the ongoing debate around the right back.

The Alexander-Arnold conundrum is one of those absurdly polarized debates football occasionally throws up, in which the rush to take extreme positions obscures a fairly basic truth. There are those who insist Alexander-Arnold is a fraud, and those who curse the supposedly excessive caution of the England manager Gareth Southgate in not selecting him. Yet the fact is surely that he is a superb fullback in a side that presses well, when he can drive forward almost at will, making the most of his exceptional ball-striking.

The problem comes when the side he is in is not pressing well, which allows opponents to measure passes into the space behind him. National teams, with limited time to prepare, never press as well as the top club sides, so Southgate’s preference for more naturally defensive right backs is understandable. And this season Liverpool’s press has malfunctioned, the issue exacerbated by the way opponents have begun to target Alexander-Arnold, capitalizing on his waning confidence.

But any claims the new shape had to be a panacea were exposed within the first minute at the Emirates. Arsenal’s transition having regained possession was rapid and incisive and culminated with Martin Ødegaard slipping a ball by Alexander-Arnold for Gabriel Martinelli to score—the 10th time Liverpool had conceded the opening goal in its last 12 Premier League games. That habit of starting slowly, quite apart from anything to do with formation or the form of certain individuals, is a major issue.

Liverpool came into the game after that as Thiago was able to get into the game and it leveled as Luis Díaz, making a run to the right flank, crossed for Darwin Núñez to level, with Gabriel looking weirdly heavy-footed. Klopp’s side seemed on top at that stage, but the Alexander-Arnold fallibility cost it again in the fifth minute of first-half injury-time as Arsenal scored a goal that exposed just how scrambled his brain has become.

Henderson seemed to have stifled a break as he forced Martinelli wide, but Alexander-Arnold inexplicably charged across to support him, leaving the center under-defended, with the result that Bukayo Saka was unmarked as he stretched to turn in Martinelli’s cross at the back post. That is not the result of the formation or of the press, but of a deeply flawed decision. Alexander-Arnold, who had taken a heavy blow on his ankle midway through the half, was withdrawn at halftime.

Arsenal began the second half the better, but it is still not a team entirely to be trusted. Just as it conceded to Tottenham’s first serious attack last week, so it proved susceptible again, its lead vanishing in Liverpool’s first serious attack of the half with Diogo Jota laying in Roberto Firmino to score.

But just as last week, Arsenal did not, as previous Arsenals have, capitulate in the face of adversity. Rather it continued to have the better of the game and regained the lead after 76 minutes, Saka converting from the spot after Thiago had been penalized for a kick on Gabriel Jesus.

This Arsenal plays slick, clever football and it has resilience, despite its habit of conceding when seemingly under little pressure. Perhaps it really could be a contender.