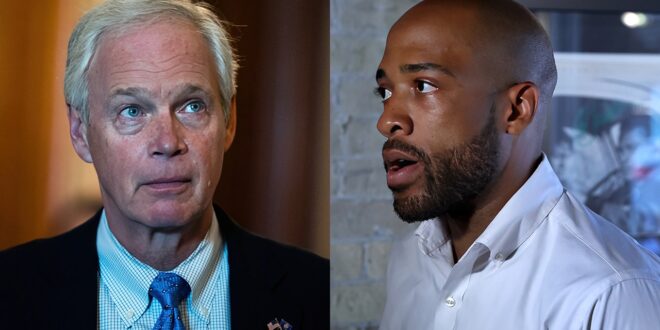 Republican Sen. Ron Johnson went after his Democratic challenger Lt. Gov. Mandela Barnes’ positions on crime Friday in the Wisconsin Senate debate, one of the most hotly contested races that could determine party control of the U.S. Senate.

Johnson has aimed numerous attacks at Barnes’ previous statements on police funding and has accused him of adding to the anti-law enforcement riots of 2020.

In numerous ads, Johnson has painted Barnes as “dangerous” and contributing to a spike in crime, and on Friday he renewed his attacks on Barnes. “He says it pains him to see fully funded police budgets,” Johnson said at one point, and elsewhere tied Barnes to the high crime.

Barnes, when addressing crime, focused on the social issues that may lead to crime.

“What we need to do is make sure that communities have the resources that they need to prevent that crime from happening in the first place. That means fully funding our schools. It also means making sure that there are good-paying jobs in communities, and we also invested $100 million into law enforcement, public safety and crime-prevention initiatives through the American Rescue Plan,” Barnes said.

Barnes denies that he supports defunding the police, though Johnson said he hides his real opinions behind phrases like “reallocating” resources for law enforcement.

The pair were also asked about gun violence. “We have 10,000 gun control laws on the books throughout America,” Johnson said. “If gun control was the solution, it would have been solved. It’s not the solution. If we want to cut down crime, the overall macro issue is we need to renew faith, strengthen families and have more supportive communities. Another gun control law just isn’t going to work. But as long as we have them, I would suggest maybe enforcing them,” he added

Barnes, a Milwaukee native, took the opportunity to decry gun violence and talk about his personal connections to victims.

Barnes has made abortion central to his campaign and said he would “absolutely vote to codify Roe v. Wade” into federal law as a senator.

A 173-year-old law bans abortions in Wisconsin except to save the life of the mother. Doctors stopped providing abortions after the Supreme Court handed down its decision overturning Roe v. Wade in June. Polling has shown that a majority of people in Wisconsin support access to abortion.

Johnson has pulled ahead in the race after some polls showed him behind Barnes in August.

A Fox News poll released late last month found that Wisconsin registered voters favored Johnson over his Democratic challenger by 4 points: 44% for Barnes vs. 48% for Johnson. In August, polls showed Barnes up by 4 (50%-46%).

Previous Jake White wary of risk of artificial pitches
Next World Cup 2022: Fans with banning orders will be stopped from going to tournament