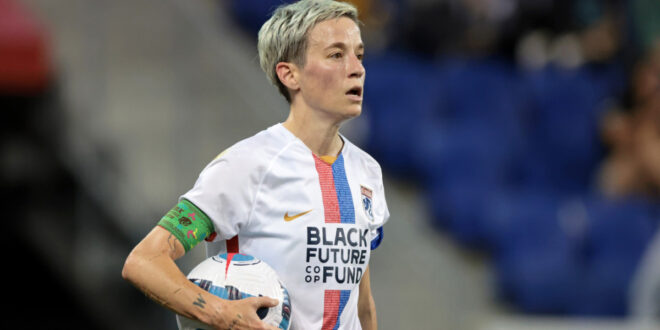 This week, former acting U.S. attorney general Sally Q. Yates released a damning report about systemic abuse and sexual misconduct in the NWSL. Speaking ahead of the U.S. women’s national team’s Friday game against England at Wembley Stadium, Megan Rapinoe spoke at length about the report, calling for the removal of two team owners cited in the report.

Portland Thorns owner Merritt Paulson and Chicago Red Stars owner Arnim Whisler were hit with extremely troublesome allegations in Yates’s report. Both owners were informed of allegations of abuse of players by the franchise’s coaches but declined to act, according to the report.

Abuse by Paul Riley—manager of the North Carolina Courage from 2017 to ’21 after a two-year stint with the Thorns in 2014 to ’15—was detailed in a report by The Athletic in September 2021. He was accused of sexual coercion and verbal abuse by former players, including those with the Thorns, and was fired that month.

After the Yates report, Paulson said he would be stepping back from ownership duties with the team.

“Yesterday’s Yates report unveiling was the darkest day I have experienced, and I know the same is true for everyone else who loves our team and our league,” Paulson said. “I would imagine that it was even harder and darker for those whose stories were shared publicly. … I cannot apologize enough for our role in a gross systemic failure to protect player safety and the missteps we made in 2015. I am truly sorry.”

A similar situation played out with Whisler and longtime Red Stars manager Rory Dames, who resigned in 2021 after a decade with the franchise. The Yates report details numerous complaints about Dames that were put aside by Whisler, who shared a close relationship with the manager.

In player surveys conducted in 2014 and ’15, Red Stars players called Dames “abusive” and “unprofessional,” and said that his behavior led to a “hostile work environment” within the franchise. Whisler reportedly believed the conduct was “Rory being Rory,” and brushed aside the many complaints about the manager. Dames also has been accused of making sexual comments toward players. Dames has denied claims of sexual misconduct and other abusive behavior.

Whisler has been removed as the franchise’s chairman of the board, and the board seeks to transition him “out of his board seat immediately with the Chicago Red Stars and to codify his removal from any further participation with either club or board operations.”

In her report, Yates says that the issues plaguing the NWSL in recent years have roots that run deeper in the world of women’s soccer.

Abuse in the NWSL is rooted in a deeper culture in women’s soccer, beginning in youth leagues, that normalizes verbally abusive coaching and blurs boundaries between coaches and players. The verbal and emotional abuse players describe in the NWSL is not merely “tough” coaching. And the players affected are not shrinking violets. … In well over 200 interviews, we heard report after report of relentless, degrading tirades; manipulation that was about power, not improving performance; and retaliation against those who attempted to come forward. Even more disturbing were the stories of sexual misconduct. Players described a pattern of sexually charged comments, unwanted sexual advances and sexual touching, and coercive sexual intercourse.

Rapinoe, who played with the Red Stars before Dames’s tenure and has been with OL Reign since 2013, called for further accountability for those in the league that have failed its players.