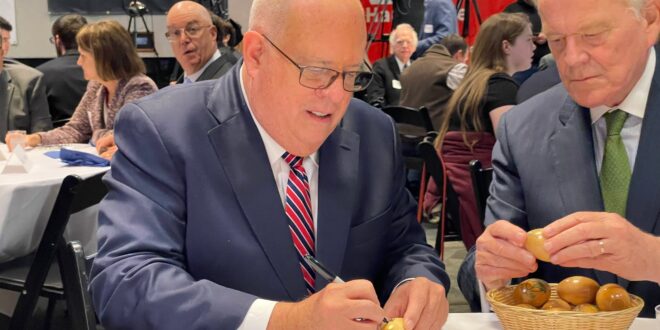 2024 Watch: Hogan touts he’s a ‘commonsense conservative’ as he opens up about potential presidential run

GOFFSTOWN, N.H. – Term-limited Gov. Larry Hogan of Maryland says he’s trying to figure out if there’s room for someone like him to run for the 2024 Republican presidential nomination.

“Is there a lane? I don’t know. That’s part of what we’re trying to find out. I think there are 10 people who want to be the next Donald Trump and I think there may be a different lane,” Hogan said on Thursday, as he answered questions from the audience as he headlined the latest edition of ‘Politics and Eggs.”

The speaking series at Saint Anselm College’s New Hampshire Institute of Politics has been a must stop for two decades for potential or actual White House contenders visiting the first-in-the-nation presidential primary state.

Asked by Fox News about a meeting he held a week and a half ago in Maryland with political advisers and top donors, Hogan said “I was updating some of my strongest supporters on exactly where we were,” but added that no decisions about 2024 will come until after his second and final term as governor ends in mid-January.”

Republican Gov. Larry Hogan of Maryland signs the iconic wooden eggs before addressing “Politics and Eggs,” on Oct. 6, 2022. The speaking series at the New Hampshire Institute of Politics is a must stop for potential or actual White House hopefuls.
(Fox News)

But Hogan said he told his donors “that we’ve been to 25 states. We’ve done hundreds of national interviews and we’ve been meeting people everywhere…. The crowd was very excited.”

The governor said he’ll hold a leadership summit he’s holding in late November in Maryland with thought leaders from around the country together to try to talk about the path forward and what we can do to get the country moving in a different direction.”

“We’re all going to gather at the end of November and try to figure out what the path forward is the for the country and what my potential future might be,” he told Fox News.

Hogan told reporters that “whenever you talk about the five or six people who might be running for president, I’m included in that discussion…. obviously, it’s a long shot and it’s not what everybody’s focused on right now. But the election is two years from now and there’s a lot of things that can change… I think that it’s going to look a lot different than it looks right now.”

The two-day Thursday-Friday swing by Hogan, a very vocal GOP critic of Trump, was his third trip to New Hampshire since July, and another indication he’s seriously weighing a presidential campaign of his own. And he said his style of campaigning is well suited to New Hampshire’s emphasis on the grassroots.

“I’m not going to have the highest name ID and I’m not going to have the most money, but I really enjoy meeting people and I won my state by shaking everybody’s hand three times and going to every single town hall,” Hogan said. “I did 380 some events. I answered every question. I went to every county fair and festival. I’m a grassroots guy and I’m kind of a down to earth, tell-it-like-it-is guy. And I think that’s ideally suited for people in New Hampshire. 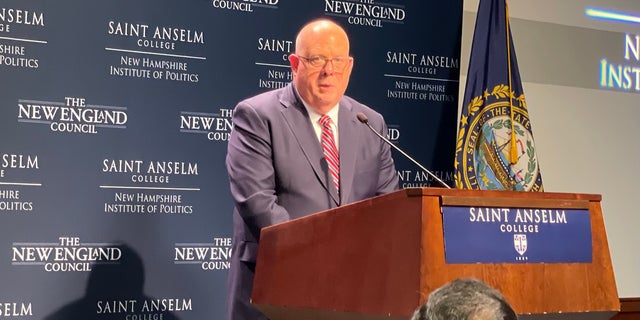 Republican Gov. Larry Hogan of Maryland addresses the audience at “Politics and Eggs,” on Oct. 6, 2022 in Goffstown, New Hampshire. The speaking series at the New Hampshire Institute of Politics is a must stop for actual or potential presidential contenders
(Fox News)

Hogan, who’s been busy crisscrossing the country helping fellow Republicans running in November’s midterm elections, also made a trip in August to Iowa, the state whose caucuses for a half century have kicked off the presidential nominating calendar.

The GOP governor of heavily blue state Maryland is often knocked by conservatives as a moderate Republican. But Hogan takes issue with that description and with accusations that he’s a RINO.

Sen. Tim Scott of South Carolina returned to Iowa this weekend to headline a fundraising event for the state Republican Party.

The trip will spark more speculation that Scott, a rising star in the GOP and the only Black Republican in the Senate, is mulling a potential White House run in 2024.

Scott headlined an event with longtime Iowa GOP chair Jeff Kaufmann on Saturday in Sioux Center, in the solidly red northwestern corner of the Hawkeye State.

“Tim Scott has been a leading voice for the Republican Party on the national stage. I know Northwest Iowa is excited to hear his story of opportunity and optimism for America’s future,” Kaufmann told Fox News ahead of the event.

The stop was Scott’s second in Iowa in just over a month. He was in Central City, in the eastern portion of the state, in late August, to headline GOP Rep. Ashley Hinson’s annual BBQ Bash. Hinson is facing a potentially difficult re-election in November. And Scott was also in Iowa in June to headline the Iowa GOP’s Cedar Rapids fundraising reception.

The senator has consistently downplayed any talk about a possible 2024 White House run. He told Fox News last year that his “only objective is to be the United States senator for the great state of South Carolina.” But Scott added that the 2022 race will be his last Senate campaign.

Even though his own 2022 re-election is all but assured in deep red South Carolina, Scott launched a new campaign commercial last week. But the spot, which takes aim at Democrats and the media for using race as a political weapon, has more of a feel of a 2024 national campaign ad rather than a South Carolina specific re-election commercial.