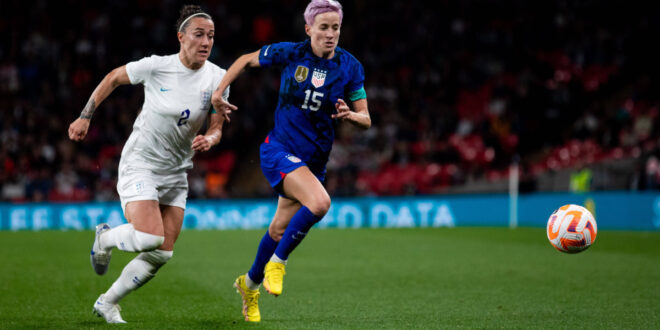 LONDON — It’s not often when a big game lives up to the moment. It’s even more rare when the moment needs a game like today. After a harrowing week in women’s soccer, Friday night at Wembley Stadium met the moment. Spectacle, catharsis, showcase, solidarity: Whatever the sport needed, the U.S. women’s national team delivered with courage, and England delivered an entertaining 2–1 win.

When Sally Yates’s damning 319-page report on emotional and sexual abuse in the NWSL sent shockwaves through the sports world Monday, the initial thought about Friday’s long-anticipated London friendly was one of concern. Maybe the game was coming at the wrong time. Maybe we needed more space before a game of this magnitude to reflect and heal and direct the wholly justified anger into the proper channels.

And then you heard the resolute words of Megan Rapinoe on Thursday calling out to find joy in a dark moment. And saw Wembley Way buzzing with England fans heading to the stadium two hours before the match, wearing England-themed cowboy hats and belting ‘Sweet Caroline,’ the nation’s anthem to two magical European summer runs. And remembered that a women’s friendly at the iconic Wembley Stadium sold out less than 24 hours after it was announced, two whole months before the actual match.

“It’s been hard to kind of find joy all the time but I think tonight was a was a perfect environment for us to play,” U.S. star Crystal Dunn said. “It is the pinnacle of what we want women’s soccer to be at. … For us we’re unified in pushing this game forward.”

Yes, a night like this was needed, even if we didn’t know it, because it was in essence a celebration of all that is good in the sport. It was a reminder that joy is the fuel that drives the game. It was a call to action that the system clearly needs to be restructured with guardrails put in place so that there are less moments of trauma and more moments of unbridled joy.

“It was an extremely difficult week for everybody and I want to say we’re proud of the players to even be on the field to play this game,” USWNT manager Vlatko Andonovski said after the match. “It wasn’t easy for someone that was in the environment to see and experience everything that they went through.

“I applaud their bravery and their fearless mentality and relentlessness. Once again, they showed that nothing can stop them from playing the game that they love. Very proud of them, and hoping that we will never have to go through it again.”

Before the match, both squads gathered behind a banner that read, “Protect the Players” while wearing teal armbands to show solidarity for sexual abuse survivors. It was a moment that Andonovski said gave him “goosebumps” with the roar of a crowd of more than 76,000. It was a touching gesture from an England side that had its own monumental moment to meet.

Friday marked the Lionesses’ first game at Wembley since they won the nation’s first European title—men’s or women’s—here in July. And after a summer where they captured the nation’s hearts, the newly crowned European champions were facing perhaps their toughest opponent in recent years in the back-to-back World Cup champions. In a year of record crowds for women’s soccer, from Barcelona to San Diego to Wembley in July, Friday’s game was a moment to open the door to scores of new fans looking to join an inspiring mission. And England accomplished just that.

After presenting the Euro trophy during an electric pregame ceremony, it only took 10 minutes for Wembley to erupt for the first time since Chloe Kelly’s extra-time winner in the memorable Euro final against Germany. Lauren Hemp capitalized on a defensive error from the U.S.’s Alana Cook to give England the early lead. Sophia Smith, the USWNT’s 22-year-old phenom, followed with a 28th-minute equalizer, but five minutes later, England’s Georgia Stanway scored what would end up being the match-winning penalty after a high boot from Hailie Mace.

VAR reviews had a hand in three goalscoring chances on the night, denying the U.S. two potential equalizers on either side of halftime. And with Ted Lasso’s Jason Sudeikis in attendance sporting a Rapinoe jersey, the Lasso-ism “if God would have wanted games to end in a tie, she wouldn’t have invented numbers,” served as a useful, if not ironic, explanation.

With the Women’s World Cup in Australia and New Zealand less than a year away, the win seemed bigger for an English side hoping to maintain its momentum than the loss did for a U.S. team trying to figure out its roster while missing stars Alex Morgan, Catarina Macario and Mallory Pugh.

But for Rapinoe and the USWNT, Friday’s match may have been most important for what it represented.

“Anytime teams come together like that, anytime any team really just takes a stand, I think it galvanizes everyone,” Rapinoe said after the match. “Without players you don’t have anything—you don’t have a game, you don’t have a sport at all. So if we’re not protected in the right ways then nothing else really matters. For us to come together and take a moment on a night like this, I think is really important and powerful.”

On Tuesday, the U.S. will face a Spanish team enduring its own moment of crisis. Just two weeks ago, 15 Spanish players—more than half the squad—removed themselves from the national team after saying that being on the team significantly affected their emotional wellbeing. The Spanish federation took the news as a veiled threat to remove manager Jorge Vilda, who the players have publicly questioned, and said none of the striking players will be allowed to return until they “ask for forgiveness.”

Rapinoe was adamant that “every single [U.S.] player is behind every single one of their players, 100%.” How the USWNT show solidarity with their opponents on Tuesday could very well be a groundbreaking moment in itself for the landscape of women’s soccer in Spain.

From Spain to the U.S., we must remember that these players are pioneering figures and courageous leaders, but also people who have endured trauma along the way. They will change the game for the better but with a personal cost because of the system and people who failed to protect them. We cannot allow the beautiful moments at Wembley on Friday that make this game so special to distract from the human element of trauma. Rather, it should be used as a reminder of what needs protecting.