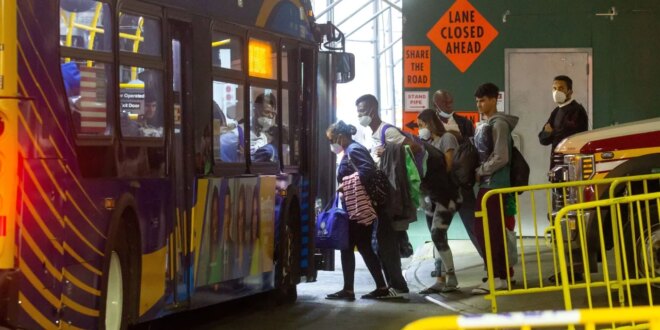 New York City Mayor Eric Adams on Friday said that the migrant “crisis” that the Big Apple is facing will cost the city at least $1 billion by the end of the fiscal year — as he declared a state of emergency and again appealed for federal aid and for other states to help.

“My fellow New Yorkers, we are in a crisis situation,” the Democratic mayor said on Friday.

He said that of the 61,000 people in the NYC shelter system, one in five are migrants as thousands have arrived either on their own or with the help of buses from Texas — being run by the Democratic mayor of El Paso and Republican Gov. Greg Abbott. Nine buses were expected to arrive in New York on Saturday filled with migrants from Texas, several others arrived in the city Friday.

“This is a humanitarian crisis that started with violence and instability in South America, and it is being accelerated by American political dynamics,” he said. “Thousands of asylum seekers have been bused into New York City and simply dropped off without notice, coordination or care and more are arriving every day. This crisis is not of our own making, but one that will affect everyone in this city, now and in the months ahead.”

Migrants leave for a shelter from the Port Authority bus terminal in New York, the United States, on Sept. 27, 2022.
((Photo by Michael Nagle/Xinhua via Getty Images))

Adams on Friday said that the costs have ballooned as the city provides shelter, food, schooling, healthcare, and other “institutional support.” The city is using dozens of hotels to house migrants and has worked on a deal with Norwegian Cruise Lines for more housing.

“We expect to spend at least $1 billion by the end of the fiscal year on this crisis. All because we have a functional, a compassionate system,” he said, before claiming that “we have not asked for this.”

The crisis comes amid a historic migrant crisis at the southern border, with 200,000 migrant encounters a month and more than 2.1 million encounters this fiscal year — with many being released into the U.S.

But the crisis in New York City has escalated since Abbott began bussing migrants to New York City last month, as well as to Washington D.C. and Chicago. Adams said that 17,000 migrants have been bussed to New York City from Texas. Abbott’s office says that it has so far sent over 3,100 on buses and intends to continue.

Abbott, along with Govs. Doug Ducey of Arizona and Ron DeSantis of Florida, have transported migrants to various liberal jurisdictions as a way of redistributing migrants to liberal areas they believe have encouraged the crisis — and also of drawing national attention to the crisis at the border.

“Texas’ inundated border towns are now receiving a measure of relief, and importantly, the magnitude of this ongoing crisis is finally gaining the national attention it deserves,” Abbott said in a recent op-ed. “Americans are now witnessing a startling national security failure that the President continues to dismiss.”

Adams used his announcement to also call for help from the federal government and from New York state. He called for financial aid, as well as a strategy that would slow the numbers coming north.

“We are at the edge of the precipice. We need serious partnership and realistic solutions. As I have said before, we need help and we need it now,” he said.

He also demanded that migrants be transported elsewhere across the country,

“We need a realistic decompression strategy at the border that will slow the outflow of asylum seekers. We need a coordinated effort to move asylum seekers to other cities in this country to ensure everyone is doing their part,” he said.