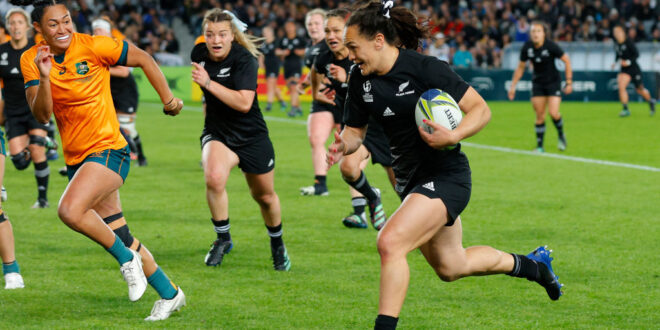 Portia Woodman scored a hat-trick as New Zealand came from 17-0 down against Australia to win their Rugby World Cup opener 41-17.

Two Bienne Terita tries and another from Ivania Wong had put the Wallaroos in control after half an hour but the Black Ferns were level within seven minutes of the second half.

First Joanah Ngan-Woo squeezed over from close range after Stacey Fluhler and Ruby Tui had made ground on the blindside in the 31st minute.

Tui was heavily involved in the second try five minutes later, too, taking an Australia clearance kick and then starting a sweeping attacking move across the pitch that led to Woodman scoring in the corner.

It was Woodman who levelled the scores soon after the break, touching down out wide again after an initial break from Ruahei Demant.

Then, with the Wallaroos reduced to 13 players after Wong and Shannon Parry were sin-binned, the tournament hosts took the lead for the first time through Ahwina Tangen-Wainohu and Woodman increased that advantage when collecting a clever Fluhler offload to go over for her third.

Tui then went from provider to scorer when she crossed twice in six minutes in the closing stages. After a rocky start, the Black Ferns closed out a relatively comfortable win.

New Zealand are automatically one of the favourites at any global rugby tournament. The 2022 Rugby World Cup is no different, particularly as they have the advantage of being the host nation for the first time.

They have not needed home comforts in the past, winning five of the seven women’s Rugby World Cups they have entered, including the previous edition in 2017. They have also lost just one match at the tournament this century – to Ireland in 2014.

Surely, then, New Zealand will romp to the title again in 2022? Fittingly, in the age of unprecedented times, their path to glory appears unusually complicated.

New Zealand’s strict Covid-19 protocol significantly hampered its sports teams, with border closures and gathering limits preventing swathes of international matches. The Black Ferns were among the hardest hit, as they did not play a game (besides two intra-squad encounters in November 2020) for 27 months.

A tour of France and England in autumn 2021 marked their return, but results were ugly. They lost all four matches, two against each opponent, by an average margin of more than 29 points. While rust certainly played a role in the harrowing defeats, that New Zealand were outclassed by their two main rivals for the World Cup was a serious concern.

A review into the team’s culture followed, which resulted in the resignation of head coach Glenn Moore earlier this year. In came legendary coach Wayne Smith as director of rugby while Graham Henry and Mike Cron have also been involved in the back-room team.

Smith has made significant changes to the squad – Les Elder and Eloise Blackwell, who had both captained the Black Ferns in recent years, have not been involved, for example – and New Zealand have shown improvement in 2022.

They enjoyed comfortable victories over Canada, USA and Australia to win the Pacific Four Series, and beat the Wallaroos back-to-back again recently to lift the O’Reilly Cup.

Ruahei Demant and Kennedy Simon will co-captain the Black Ferns at the World Cup, with Smith’s squad a mix of youth and experience.

Kendra Cocksedge and Renee Wickliffe have been selected for their fourth World Cup, while centre Sylvia Brunt is going to her first at the age of just 18.

Smith, who is going to his first women’s World Cup but fifth overall, wants his team to play entertaining rugby in front of the home supporters.

“We’ve talked a lot this year about wanting to play an exhilarating style of rugby and we have seen that developing throughout the year,” he said. “We want to play on top of the opposition and that requires a certain set of skills that we have been working really hard on.”