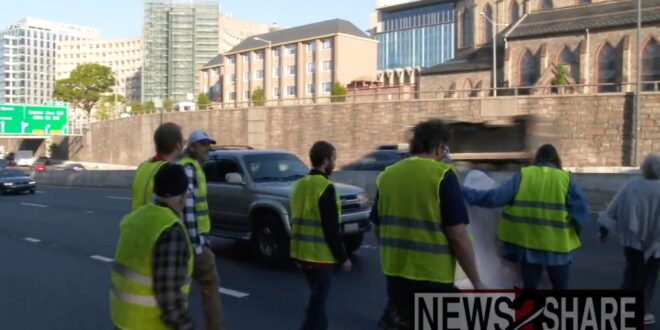 The activists, with the environmental group Declare Emergency, sat on I-395, a major highway that feeds into Washington, D.C., until they were eventually arrested by police officers, according to video posted by Ford Fischer of the independent media outlet News2Share. Declare Emergency organized the protest to publicly demand that President Biden declare a “climate emergency.”

“We do not enjoy putting our bodies on the line, we do it because we must,” Declare Emergency tweeted following the protest. “We will keep doing it until ⁦[Biden] declares a climate emergency and stops fossil fuel extraction on federal and indigenous land.”

“We’re in a dire situation, and we need to declare an emergency now,” one of the activists told Fischer during the protest.

But the stunt triggered an angry response from drivers who told the activists the protest was blocking their commute.

The driver then took two of the protesters’ signs and threw them away.

Another driver said the activists were blocking her from getting to her mom. She then threatened violence against the group.

“Move before I pull my gun out,” she said.

The protesters decided to let her through but didn’t allow any other drivers to drive by. At one point, another driver began to preach about the Bible and tried to evangelize the activists.

Police ultimately showed up about 30 minutes after the protest started, according to Fischer. Some drivers clapped as the activists were handcuffed and arrested.

While Biden has focused much of his presidency on combating climate change, he has yet to formally declare it a national emergency. A climate emergency declaration would enable Biden to bypass Congress and take a number of regulatory steps not normally authorized to the White House.

In July, after reports that the president would issue such a declaration, he opted instead to issue executive orders addressing the “climate crisis,” but he stopped short of an emergency declaration.

“This is an emergency — an emergency — and I will look at it that way,” Biden remarked at an event announcing the actions. “I said last week, I’ll say it again, loud and clear. As president, I’ll use my executive powers to combat climate change, the climate crisis, in the absence of congressional action.”