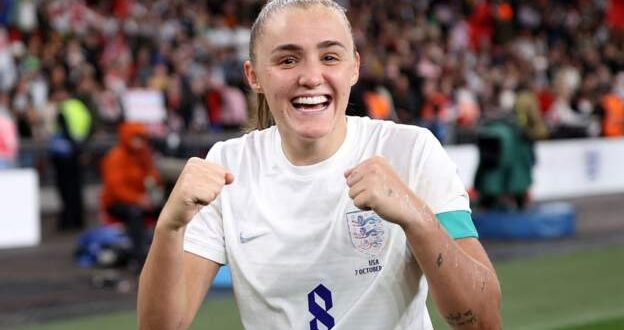 Manager Sarina Wiegman said England “don’t win a World Cup now” just because they defeated the United States – but their victory at Wembley suggests they could be the team to beat next summer.

The USA have won back-to-back World Cups and have long held the edge over England on the big stage.

But as European champions brimming with confidence, England showed on Friday they are right up there with the best with only 10 months to go until the 2023 World Cup.

The result extends England’s unbeaten run to 23 games under Wiegman – winning 15 of them in a row – and was their first victory against the USA since 2017.

It also ended the USA’s unbeaten run – they had won 18 and drawn three of their last 21 matches in all competitions, winning 13 consecutive games prior to Friday’s defeat.

England were fortunate on occasions as the USA had a goal disallowed, a penalty award overturned and a spot-kick given against them following VAR reviews.

But it was the manner in which England imposed themselves on the USA which proved they have come a long way since the two teams last met in 2020.

“I think the USA will be looking at us and thinking ‘wow, that’s how you play in possession’,” former England midfielder Karen Carney told ITV.

“In my career, we never really had that. We were always looking at the USA and were scared of them. But [on Friday] they came on our home soil and saw us play them off the park at times.”

England have an “aura” about them now, added Carney, and Wiegman believes confidence has grown during her time in charge – helped by their success at Euro 2022.

This match against the USA may only have been a friendly but it comes 10 months out from the World Cup and will help to build momentum.

“It was a good measure. It’s good to have a test against the USA as they have won so many things over so many years. But it’s now October and not July yet,” said Wiegman.

Asked if England’s unbeaten run has given them belief they can beat anyone in the world, Wiegman added: “We have proved to ourselves that we can do it. In the Euros we showed we could beat anyone.

“It’s a thin line between winning and losing but we could bring on something that could win against the best opponents and that’s what we showed again [against the USA].”

It was a victory earned without injured striker Alessia Russo and captain Leah Williamson, though the USA were also missing key players and are in a transition period with several younger stars coming through.

Wiegman wanted her side to control the ball and create chances which they managed to do for large periods.

The USA were also a threat and there were nervous moments in the game for England, who were put under pressure in a frantic and explosive encounter.

Wiegman, usually so relaxed, joked she was “not calm at all” when midfielder Keira Walsh kept the ball inside her own area at one point before passing it back to goalkeeper Mary Earps to hastily clear.

“She loves to play out but I would have preferred her to do it a little higher up the pitch!” Wiegman added.

But former England defender Stephen Warnock believes the hosts showed enough quality and nerve to prove they can compete with the best.

“We brought to Wembley the most successful international team to challenge them. It showed the standard of the [women’s] game,” he told BBC Radio 5 Live.

“This USA team will compete at the highest level at the World Cup and this shows what England under Sarina Wiegman can achieve.”

There is still a long way to go until next summer’s World Cup though, and Wiegman is keen to stay grounded.

Meanwhile, USA boss Vlatko Andonovski “absolutely believes” England are contenders to win next year’s tournament, though he hopes his side will be the team to stop them.

“They have an incredible squad and they showed once again they are very good,” he added.

“If you give them space, they have players who can make a difference. They have an incredible coach and I wouldn’t mind facing them again in the final!”