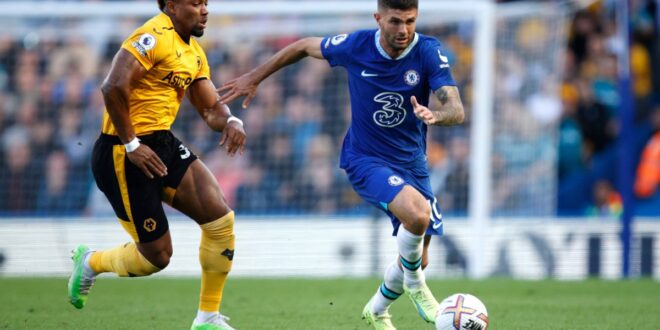 Pulisic, who was back in Graham Potter’s starting lineup for just the second time this season for the weekend’s tilt at Stamford Bridge, created a number of opportunities in the first half but failed to cash in as the Blues carried a 1–0 lead in the halftime locker room. Following the break, it didn’t take long for the American forward to break through.

In the 54th minute, Pulisic streaked down the left side of the field, exchanging passes with midfielder Mason Mount. When Mount ended up with the ball just outside of the box, he slipped a pass between two Wolves defenders, clearing up Pulisic for a one-on-one with goalkeeper José Sá.

Pulisic made the build-up worthwhile, beating Sá with a crafty left-footed chip to extend Chelsea’s lead to 2–nil.

The goal marked Pulisic’s first score in eight appearances to start a rather tumultuous Premier League season at Chelsea. The 24-year-old was rumored to be available in the transfer market at the start of the year, but whispers of a move died down when the club sacked manager Thomas Tuchel just a few matches into the campaign.

Pulisic will hope to build off of the momentum generated by Saturday’s goal and hope that Chelsea can do the same. After a 3–0 victory over Wolverhampton, the club improved to 5–1–2 on the year (16 points).