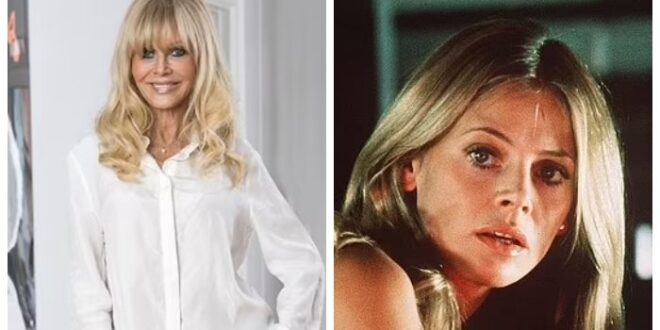 Britt Ekland, who is known for playing glamorous Bond girl Mary Goodnight in the 007 films insists she will retain her bombshell looks until ‘the day I die.

The actress, who starred in the franchise’s 1974 movie The Man with the Golden Gun, turned 80 this week, confidently told the Mirror: ‘I will be dyeing my hair till the day I die. Vanity is my best friend.’

She added: ‘I don’t think there are many people who get to my age and can work and run around and take care of things and enjoy life and feel healthy and happy. ‘That is something I am very thankful for.’

Britt starred alongside the late Sir Roger Moore in The Man with the Golden Gun and she says she still gets recognised today.

People who meet me still call me a Bond Girl,’ she explained. ‘And they find it so exciting – like I made the made the film yesterday. But 007 is almost as old as me now.’

The star said there is nothing that makes her prouder than knowing she is part of ‘film history’, adding that she sees the Bond character as an ‘icon’ and as a Bond girl, she is part of the franchise’s legacy.

Despite Britt taking pride in her looks today, she has previously spoken out about her regrets at getting fillers in her face, describing them as ‘the biggest mistake of my life.

Previous Dwayne ‘The Rock’ Johnson says potential presidential run is ‘off the table’
Next As Iran protests continue, experts discuss the likelihood of regime change