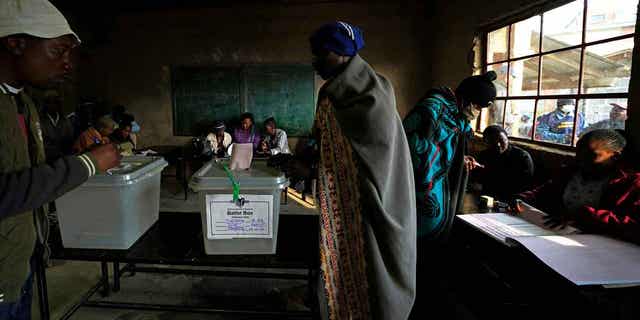 Vote counting has begun in southern Africa’s tiny mountain kingdom of Lesotho following a day when thousands of citizens in urban and rural areas voted to elect the country’s 120 legislators.

The Independent Electoral Commission will announce the official results, which some expect will come by Tuesday.

No major disruptive incidents in the voting have been reported, although some accounts from voters and polling officials indicated that some people whose names were not on the voters’ roll were turned away.

At one station in Thaba Tseka district in the rural part of the country, the expected turnout was almost half of the number of registered voters expected.

The elections are a tight race between the top three parties out of a field of more than 60 registered political parties.

Outgoing Deputy Prime Minister Mathibeli Mokhothu of the Democratic Congress party is running against his current coalition partner Nkaku Kabi of the All Basotho Convention and businessman-turned-politician Sam Matekane of the Revolution for Prosperity.

Friday was a public holiday to encourage voting by the country’s 2.1 million people. Lesotho is entirely surrounded by South Africa.

Lesotho’s King Letsie III presides over a constitutional monarchy but has virtually no political power. Whichever party wins enough representatives in the National Assembly to form a government will select the new prime minister. With so many parties contesting the election, a coalition is very likely, say experts.

At a polling station in Thetsane, an industrial area of the capital Maseru, a mix of elderly, women and young people waited in line as voting got off to a slow start after polls opened at 7 a.m.

Many voters told The Associated Press that they hoped the election of new leaders would bring change as the country is facing high levels of unemployment, increasing crime and political instability.

Tseliso Seutlwadi, 32, who is unemployed was among the first to vote.

“We need a change and it will only be brought by us through our votes. Basically unemployment is too high in this country. We have university degrees but we know that only 10% of people get hired. What happens to the rest?” asked Seutlwadi.

A man wearing a blanket casts his vote at a polling station in Maseru, Lesotho, on Oct. 7, 2022. Voters across Lesotho are heading to the polls Friday to elect a leader to find solutions to high unemployment and crime.
(AP Photo/Themba Hadebe)

He said that many people had lost jobs at the factories during the COVID-19 pandemic and some had turned to crime and prostitution to make a living.

“As young people we want to have an impact on the future of this country. We can see factories closing down, rape against women is on the rise, we have to stand up as young people and influence what happens in this country,” said 37-year-old Ntsoaki Lenea.

The garment-making industry is Lesotho’s largest employer after the government and had more than 45,500 textile workers at the beginning of 2020, but about 25% of those jobs were lost during the pandemic, according to official statistics.

LESOTHO’S FIRST LADY TO FACE MURDER CHARGES AFTER TURNING HERSELF IN, POLICE SAY

About 320,000 people in Lesotho are currently experiencing a severe food “crisis” and are in urgent need of aid “to save lives, reduce food gaps, protect and restore livelihoods and prevent acute malnutrition,” according to the Integrated Food Security Phase Classification.

Election observers from the European Union, the Commonwealth, the African Union and the Southern African Development Community are in Lesotho to assess the electoral process.