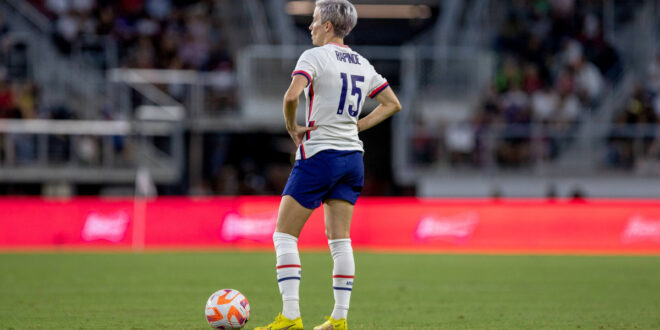 LONDON — Megan Rapinoe was in a remarkably light mood for such a dark week in women’s soccer. Unfortunately, she said, the sport and its players are used to weeks like these.

The first week of October was supposed to be a pure celebration of women’s soccer: the U.S. vs. England, the reigning World Cup champion against the newly crowned European champion, in a packed Wembley Stadium that sold out in less than a day. But the shadow of former U.S. Deputy Attorney General Sally Yates’s bombshell report, which Rapinoe called “devastating,” will be cast onto the field like the Wembley arch after more damning revelations of emotional abuse and sexual misconduct in the NWSL were released Monday.

“Just to have to deal with that on such an incredible occasion, to be here at Wembley and be able to participate in this game, which is so exciting—the juxtaposition is ridiculous,” Rapinoe said during Thursday’s pre-match press conference.

Yates’s 319-page report focused primarily on the alleged misconduct of former Portland Thorns coach Paul Riley, former Racing Louisville coach Christy Holly and former Chicago Red Stars coach Rory Dames, along with the failure of U.S. Soccer and NWSL leadership to properly investigate formal complaints made by players. And Rapinoe didn’t hold back on her feelings of disdain for the coaching figures at the center of the report.

“Rory’s been an a–hole for the entire time that I’ve known him, from the first second that I heard him on the sideline, since the first season that I ever played,” Rapinoe said. “Paul is the same. I don’t know Christy Holly personally but everything I heard about him was horrible.”

But when Rapinoe listed the nonstop turbulence and the issues that the USWNT has taken on—“the lawsuit, equal pay, kneeling,” and now the Yates report—she did so with a sense of pride. On Thursday, she laughed and joked, but also spoke with resolute clarity and resilience about how the team has reacted to an emotionally draining week.

“We always wish that we never had to do this,” Rapinoe said. “We never wish we had to file a lawsuit or do any of the things that we’ve had to do, that we’ve spoken about, but that’s just not the reality.

“It’s something that I’ve seen as always taking pride in and taking on and ensuring that we bring the game to a better place and I think the game is already in a better place after this report.”

The next step, according to Rapinoe, is action and accountability. While the league waits on a joint investigation with the NWSL Players Association, the report’s recommendations could be a place to start. They include policies that would change the nature of coaching licenses from a one-time “diploma” process to an annual renewal format that would also make sure coaches disclose new complaints of misconduct; require the NWSL to conduct “annual training on abuse, sexual misconduct, harrassment and retaliation”; and institute player surveys along with a confidential channel for reporting abuse.

Meanwhile, the shockwaves from the report have already led the NWSL to begin cleaning house. The Thorns fired general manager Gavin Wilkinson and president of business Mike Golub, while the club’s owner, Merritt Paulson, has removed himself from daily club duties. Red Stars owner Arnim Whisler was removed from his role as chairman of the board and also relinquished day-to-day operations.

But Rapinoe said both owners should be completely out of the game since “they didn’t protect the players at all, year after year.”

“None of those people have shown that they deserve to be around this beautiful game and have a right to be because they can’t even do the basic responsibilities of their job. … We need to see those people gone, so people who will take care of the game, respect the game and help the game grow in the best way possible can replace them.”

Even with the trauma of the report’s finding, Rapinoe wants the historic Wembley friendly to be “a special moment for us all to come together and celebrate women’s football for all the good that it is.”

That good was seen in a moment of solidarity as England forward Beth Mead revealed that England players reached out to the U.S. team to discuss a show of support during Friday’s match, where roughly 87,000 fans are expected at the iconic London stadium.

In a similar vein, U.S. star Crystal Dunn, who returned to the team just four months after the birth of her son, said Wednesday that the U.S. must strive to find joy in the game despite the fallout from the report.

“The jerseys that we’re wearing, it’s hard to be happy in them; it’s hard to find joy in it,” Dunn said Wednesday. “… Unfortunately the joy sometimes is taken away, and I just would encourage all my teammates to try and find it every step of the way.”

It was Dunn and Rapinoe who set the example during Thursday’s training. As the team stretched on the Wembley pitch, speakers suddenly came to life with music that caused the duo to spring into an impromptu dance-off, complete with twerking and a few two-step routines. They have made it clear to the U.S. women’s national team and the world that no one will limit their joy for the sport.

On Friday night, in one of the soccer world’s most iconic stadiums, the noise will eventually melt away, to be replaced by a sold-out crowd there to see a field of champions. The joy will return and there will still be a celebration of the sport—but maybe more deserving, a celebration of the resilient figures who continue to pursue their joy through the darkest of moments.