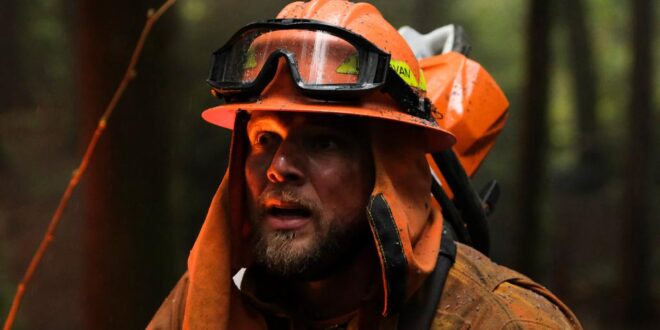 Max Thieriot is an inmate firefighter in ‘Fire Country’ on CBS

Max Thieriot moved with his “SEAL Team” co-stars to Paramount+ for the series sixth season — and he’s back on CBS starring in “Fire Country,” a new drama premiering Friday (Oct. 7) at 9 p.m.

Thieriot, who’s also a series co-producer and co-writer, plays Bode Donovan, who’s doing time in a Northern California prison (Lompoc) for armed robbery. He’s denied parole, but gets a shot at redemption by volunteering for a program in which inmates work alongside professionals fighting raging wildfires — and, in the process, shave time off their sentences.

The series is inspired, in part, by Thieriot’s experiences growing up in Occidental, a small town in Sonoma County, and owning a winery in the area for the past 11 years.

“I grew up in this tiny town of a thousand people and many of my friends do this job in the real world,” Thieriot, who turns 34 Oct. 14, told The Post. “I had a lot of friends that lost their homes in these [wildfires] that have swept through the area the past five or six years. I have friends in Paradise and friends right in Santa Rosa, only 20-30 minutes from where I live, who lost their homes.

“I’ve also been evacuated multiple times from my home,” said Thieriot. “The fires have come right up to the winery and we’ve lost our crops. In 2017, when the Tubbs Fire came through it burned a lot of northern Santa Rosa and a lot of lives and homes were lost. Myself and a couple of buddies who own the winery with me and our general manager … started a fundraising campaign to raise money for fire victims. We raised over $1 million and with the help of Habitat for Humanity we built a bunch of small homes that we gave to people to live in after their lost their homes.

“It felt like a good time to highlight the heroes who do these jobs.”

In the “Fire Country” opener, Bode and a busload of his fellow inmates are sent to a firefighting training camp located near Edgewater — which happens to be his hometown. That, in turn, triggers a range of emotions in Bode, who’s hiding some secrets.

“Bode was essentially was an All-American guy with a potentially large baseball career ahead of him who came from this small town and did not have anything to do with the firefighting community,” Thieriot said. “Through a series of unfortunate events that led to his incarceration … he ends up at the one camp in the town in which he grew up, so now he’s back to face all his demons. Prison has changed him; he’s a guy who used to be more bubbly and fun and outgoing and is now suffering from a lot of shame — and he needs to get over that and go through recovery to try to get closer to the person he was before.

“That’s going to take bending a lot of relationships and working on his self-worth,” he said. “There’s an amazing line in an upcoming episode that sums up who Bode is. Manny [Alejandro] says to him, ‘You were incarcerated long before you went to prison.’

“That’s what put him in his own personal jail and now he’s got to free himself.”