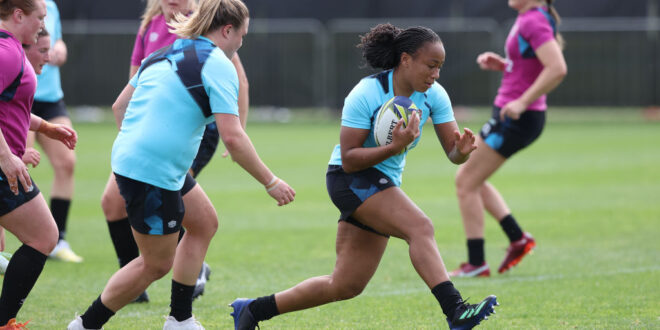 England are unquestionably the team to beat at the 2022 women’s Rugby World Cup.

Simon Middleton’s side have won a record 25 consecutive Tests in a run that dates back to 2019 and includes three perfect Six Nations campaigns.

They open their campaign against Fiji at Eden Park on Saturday and have named a strong team for the fixture, with No 8 Sarah Hunter as captain and centre Emily Scarratt as vice-captain.

Sadia Kabeya starts at openside having completed her isolation period after testing positive for Covid-19 soon after arrival in New Zealand while Abby Dow is in line to play her first match since breaking her leg against Wales during the Six Nations having been named amongst the replacements.

Of the wing’s return, Middleton said: “Every session she gets better. It’s remarkable, but it’s not by chance, it’s the amount of effort she puts in.”

While Marlie Packer (foot) and Lark Davies (ankle) don’t feature in this match-day line-up due to injury niggles, Middleton is confident they will be fit for the next pool match against France.

Sarah Hunter will captain the Red Roses at the World Cup. She is one of 19 forwards named in Simon Middleton’s squad, which includes 13 backs.

There are six players who were involved in the 2014 World Cup win – Hunter, Emily Scarratt, Marlie Packer, Laura Keates, Alex Matthews and Lydia Thompson. Despite suffering a broken leg during the Six Nations, wing Abby Dow is also included.

However, there is no place for scrum-half Natasha Hunt, who returned to the Red Roses set-up for the Six Nations but has not made the cut for the tournament in New Zealand. Instead, Middleton has opted for Leanne Infante, Claudia MacDonald and Lucy Packer as his scrum-half options.

The other players from the training squad who have not been selected are Amber Reed, Emma Sing, Sarah Beckett, Bryony Cleall, Detysha Harper and Vicky Fleetwood.

Middleton, who was an assistant coach when England won the World Cup in 2014, said: “We are really confident with the balance of the squad. I am pleased with the way the team is gelling and how our game is coming together. There is still plenty to work on, we expect to improve game-on-game.

“While this is a squad announcement and not about singling out individuals, it would be remiss not to reference our captain, Sarah Hunter. Sarah is a better captain now than she has ever been. She has owned the captaincy and how she represents the squad on and off the field is absolutely brilliant.

“When you work with someone for so long you sometimes need to remind yourself of her outstanding attributes, she is unbelievable in how she conducts herself. Her pride in and love of representing her country is as strong as ever. She is a class act and we are very fortunate to have her leading the side at this tournament.”