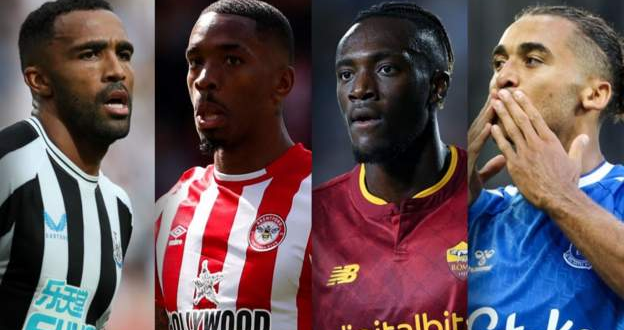 England: The strikers looking to challenge Harry Kane at the World Cup in Qatar

With just over a month until England’s opening World Cup group game against Iran, Gareth Southgate is close to naming his squad for the tournament.

The Three Lions boss is due to pick his provisional squad later this month with a number of big dilemmas – including who to take in attack alongside Harry Kane.

Kane is a shoo-in to start, fitness providing, as he looks for the two goals he needs to equal Wayne Rooney’s goalscoring record for the men’s national team of 53.

But there are a number of strikers jostling for position behind him, with two of them – Ivan Toney and Callum Wilson – going to head to head on Saturday as Newcastle entertain Brentford in the Premier League.

BBC Sport takes a look at the four main contenders to be Kane’s understudy and whether they could be the right fit.

Callum Wilson – ‘I’m on the plane’

Despite missing five games with a hamstring problem, Newcastle’s Callum Wilson has scored three Premier League goals this season, including in both of the side’s league victories. He returned for the win against Fulham on Saturday and he should have enough time to get up to speed to get on the plane.

“I’m on the plane, Harry Kane’s on the plane. There’s going to be players travelling to the World Cup that don’t make the September squad. There’s always one or two players who come from nowhere.”

Despite his lack of action action throughout 2022, thanks also to a calf injury which kept him out between December an April, his minutes-to-goal ratio of 103 ranks as the highest on this list, as does his shot conversion rate of 26.32%.

Wilson, who has four caps – none since 2019 – would provide something different to Kane’s preference for dropping deep, too. He had just 12 touches in 66 minutes at Craven Cottage, with five coming in the box.

Ivan Toney – ‘He has a burning ambition’

Ivan Toney’s call-up was the headline of the last international break, but he didn’t play against either Italy or Germany, meaning he will be uncapped if he goes to Qatar.

Speaking in his news conference after joining up earlier this month, Toney said he never doubted his inclusion, which came at the age of 26 and follows his departure from Newcastle and career rebuild at Peterborough in 2018 before his move to the Bees a year later.

“If you manifest it, you always have a big chance of doing it. No matter where I was – whether I was on loan here, there and everywhere, I always believed in myself that one day I would be a Premier League player,” he said.

“Now I’m a Premier League player and an England international.”

Peterborough director of football Barry Fry predicted his rise as he broke the Championship’s goal record for a season with 31 in 2020-21. That accolade has since been taken by Fulham’s Aleksandar Mitrovic.

“He has a burning ambition to be the best centre forward in the Premier League,” Fry told BBC Sport. “He’ll be the Golden Boot winner in a couple of years in my opinion.”

Toney scored six penalties last season, with an overall record of 23 successful spot-kicks and one missed. That is exactly the kind of stat that will pique Southgate’s interest.

Dominic Calvert-Lewin – ‘He is a complete forward’

Like Wilson, injuries have hampered Dominic Calvert-Lewin’s progress for some time. He only made 17 Premier League appearances last season, scoring five goals, which many believe played a big part in Everton’s flirtation with relegation.

He is yet to feature in this campaign and his lack of action has most likely put him at a disadvantage when it comes to making this squad.

But, having made the squad for Euro 2020 last summer, the 25-year-old is the only one of the four to have senior tournament experience.

Former Brighton striker Glenn Murray outlined why he is such a handful when fit on BBC Radio 5 Live.

“Calvert-Lewin is a pretty complete forward,” Murray said “He’s a big boy, he’s dominant in the air, he can hold it up, but he’s also very mobile and can run channels quite comfortably.

“Those types of forwards in this modern day game are so difficult to find. You’re talking different class and teams like Everton don’t have a like-for-like replacement for that quality.”

Tammy Abraham certainly has the stats to back up his claim to join Kane on the plane.

The 25-year-old moved to Roma last summer to link up with Jose Mourinho and his game has developed immensely since leaving Chelsea.

He scored 17 Serie A goals in 2021-22, making him the most prolific Englishman in the league’s history, and he admitted in April that the move gave his career fresh impetus.

The current season sees him on two goals from seven Serie A starts.

“To do what I’m doing now for a great club like Roma, I can’t really describe the feeling,” he said.

“Coming off the back of a difficult season at Chelsea, where I wasn’t really playing games, to coming here and shining again, it’s like a dream come true.

“I’ve always been a player who never lacks confidence. From a young kid I’ve always scored goals and wanted to win. Even when I score in training I celebrate like it’s a match.”

Both he and Toney are level on 13 league goals in 2022 – the most of the four in consideration – while his England record is identical to that of Calvert-Lewin.

Abraham has the best shot accuracy with 57.89%. It hasn’t quite worked out for him internationally yet but he is fit, firing and proving himself at a high level.

If you are viewing this page on the BBC News app please click here to vote.

Previous After DACA defeat, Dems ramp up pressure on Senate Republicans to move on amnesty
Next Lionel Messi Confirms Qatar World Cup Will Be His Last