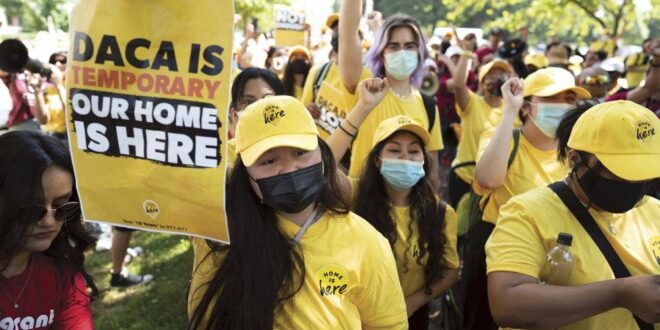 A federal appeals court determined that the Obama administration didn’t have the authority to institute the Deferred Action for Childhood Arrivals program but declined to dismantle it, allowing more than 600,000 immigrants to continue to enjoy its protections.

The 5th U.S. Circuit ordered a review of new changes by the Biden administration to DACA, telling a Texas federal judge to review the program.

A three judge panel from the 5th U.S. Circuit Court of Appeals also ruled that while the Obama administration lacked the authority to create the immigration policy which affects over 600,000 people, it didn’t dismantle the program, and people can continue benefiting from the policy.

Susana Lujano, left, a dreamer from Mexico who lives in Houston, joins other activists to rally in support of the Deferred Action for Childhood Arrivals program, also known as DACA, at the U.S. Capitol in Washington on June 15, 2022.
(AP Photo/J. Scott Applewhite, File)

“A district court is in the best position to review the administrative record in the rulemaking proceeding and determine whether our holdings as to the 2012 DACA Memorandum fully resolve issues concerning the Final Rule,” the opinion states.

Several Republican-led states are suing the U.S. government, arguing that they are being harmed financially by spending hundreds of millions of dollars on services such as education and health care for people who are being allowed to stay in the U.S. illegally. 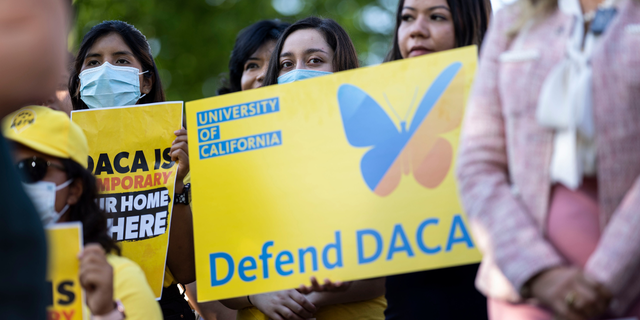 The Biden administration presented changes to DACA in August which were open to public comments, but don’t contain substantial modifications to the Obama-era policy and are pointed at legal challenges in relation to the program. 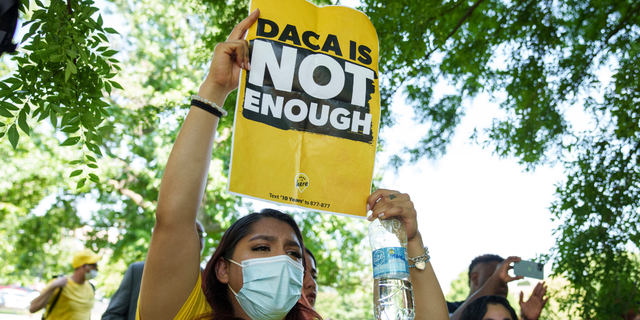 Immigration advocates rally to urge Congress to pass permanent protections for DACA recipients and create a pathway to citizenship, near the U.S. Capitol June 15, 2022 in Washington, DC.
(Photo by Drew Angerer/Getty Images)

In July 2021, U.S. District Judge Andrew Hanen ruled that DACA was illegal and said that it wasn’t put through public notice and comment, which is a requirement by the federal Administrative Procedures Act.

When President Biden took office in 2021, he signed a memo aiming to protect DACA and ordered the Department of Homeland Security to take “all appropriate actions under the law” to protect the program.

Secretary of Homeland Security Alejandro Mayorkas said in a statement that he’s disappointed by the ruling.

“I am deeply disappointed by today’s DACA ruling and the ongoing uncertainty it creates for families and communities across the country. We are currently reviewing the court’s decision and will work with the Department of Justice on an appropriate legal response,” Mayorkas said. “As a result of the stay that remains in place, no one who currently has DACA will lose their protection from removal or work authorization. Consistent with that stay, DHS will continue to accept the filing of both initial and renewal DACA applications, but will process only the DACA renewal requests.”

Previous Democratic candidate running in toss-up race called to end oil and gas ‘immediately,’ said ‘shut it all down’
Next China still benefits from Russia relationship, even with international reputation at risk: experts