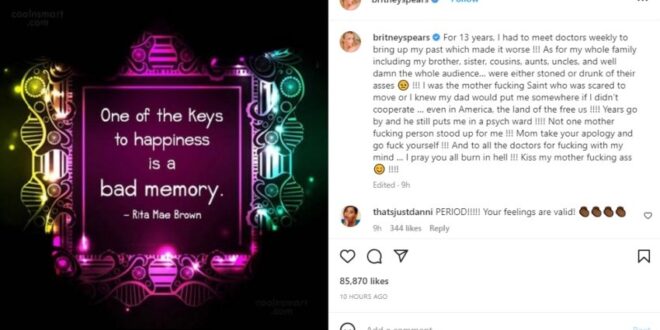 Britney Spears pens brutal post for mom Lynn Spears, ‘no one stood up for me’

Britney Spears has called out her mother Lynn Spears after she issued a public apology to her while requesting the Toxic singer to unblock her on social media.

Taking to her Instagram handle, the Gimme More singer shared a quote of Rita Mae Brown that reads, “One of the keys to happiness is bad memory.”

Spears penned a lengthy caption alongside the post, saying, “For 13 years, I had to meet doctors weekly to bring up my past which made it worse!!!’ she said. ‘As for my whole family including my brother, sister, cousins, aunts, uncles, and well damn the whole audience… were either stoned or drunk!!”

The Grammy-winning singer said she “was the [expletive] Saint who was scared to move’ or her father Jamie Spears would put her somewhere if [she] didn’t cooperate … even in America, the land of the free!!!!”

The Criminal singer vented that her father still put her “in a psych ward,” not one [expletive] person stood up for her.”

Spears concluded her post, saying that she doesn’t accept her mom’s apology and said, “Mom take your apology!!!! And to all the doctors for with my mind … I pray you all burn in hell!!!”

Lynne, 67, last week dropped a comment on the singer’s previous posts about her grievances with her family.

“I’m sooo sorry for your pain!” she said. “I have been sorry for years! I love you so much and miss you! Please unblock me so I can speak to you in person! Britney, deep down you know how much I love and miss you! I apologize for anything and everything that’s hurt you!”