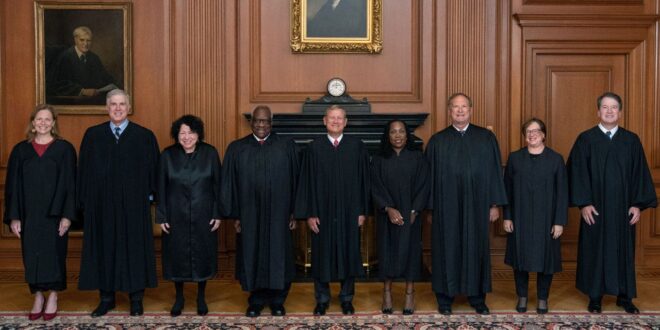 The Supreme Court’s conservative majority appeared ready Tuesday to uphold Alabama’s GOP-friendly congressional map, in an important voting rights case that could major implications in the 2024 race and beyond.

In a tense nearly two-hour oral argument, the state argued it was taking a “race-neutral” approach in creating voting boundaries, and that it should not be forced to sort voters by race.

But the Biden administration and civil rights groups told the justices not to weaken enforcement of a key provision in the landmark Voting Rights Act.

The state’s redistricting plan is being challenged after the redrawn map continued having just one of its seven congressional districts where racial minorities form a majority of voters, even though statewide, there is a 27% Black population.

But the Supreme Court in February issued a preliminary order, allowing the state for now to use its maps for the 2022 midterm elections, which were enacted by a Republican-led legislature. The justices also put on hold a similar effort to add a second Black majority district in Louisiana in time for November’s races.

Alabama’s current congressional delegation has only one Black representative — Terri Sewell (D)— from the only Black-majority district.

The three-judge federal judicial panel had concluded the existing map drawn based on the 2020 census likely violated the Voting Rights Act and diluting the voting power of minority voters — by squeezing Black voters into one congressional district, then spreading out other Black voters across the state to make it more difficult for minorities to elect the candidate of their choice.

Section Two of the VRA, the provision at issue here, bans a state from voting practices that “result in a denial or abridgment of the right to vote on account of race or color,” and that election rules must be “equally open.”

Federal intervention happens when “people are continuing to vote in racially blocked ways, but if that stopped happening, if what we all want, which would be people to spread out and live among one another and vote based on their, own views as opposed to along racial lines, then we wouldn’t have a Section 2 violation. Is that correct?” Jackson said that was not what was happening in Alabama.

Justice Elena Kagan talked in broader terms, saying, “In recent years, the [Voting Rights Act] statute has fared not well in this court.”

She told LaCour,  “You’re asking us essentially to cut back substantially on our 40 years of precedent and to make this too extremely difficult to prevail on. So what’s left?”

The conservative justices by comparison asked few questions of counsel. Justice Clarence Thomas, one of two Black members on the court posed just one query, while Justice Neil Gorsuch was silent throughout.

But Justice Samuel Alito strongly questioned the Biden Justice Department’s stance, saying some states would never be able to satisfy the demands of those seeking to maximize minority voting power.

Justices Brett Kavanaugh and Amy Coney Barrett could prove key to the outcome. They asked tough questions of both sides, and their comments suggested that while they may ultimately side with Alabama, they may be inclined to preserve key parts of Section Two of the VRA.

The high court in recent years has weakened parts of the Voting Rights Act dealing with enforcement of alleged violations over minority voting power.

The court next month will hear another important voting rights case, testing whether state courts had improperly taken powers given by the U.S. Constitution to state lawmakers governing federal elections and congressional redistricting.

The high court is now being asked to invoke the “independent state legislature doctrine” for the first time.

Backers of ISL say Article 1 of the Constitution — notably the “Times, Places and Manner of holding Elections for Senators and Representatives, shall be prescribed in each State by the Legislature thereof” — gives state legislatures sole authority to regulate federal elections, without oversight by state courts or state constitutions.