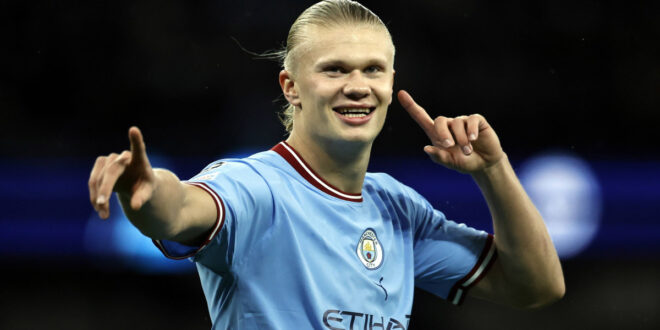 There is in form, and then there is whatever Erling Haaland is at the moment.

Haaland fell just short of his fourth hat trick of the season after he was subbed off at halftime, but the Norwegian now has 18 goals in 12 games since arriving at Man City from Borussia Dortmund this summer. He currently leads the Premier League with 14 goals and the Champions League with five goals

The Norwegian forward didn’t have to wait long, opening the scoring for Manchester City in the seventh minute. Haaland lurked in the penalty area before pulling back to meet a João Cancelo cross, which he easily fired home to give City the 1–0 lead.

Haaland was gifted his second goal of the evening in the 32nd minute, thanks in part to Cancelo once again. The Portuguese fullback sent a shot on target that was parried away, but the chance fell right into Haaland’s path for the easy tap-in to double the City lead.

The 22-year-old nearly had a third in the 39th minute as he waited for the clear chance before Copenhagen defender Davit Khocholava turned the ball into his own net for the own goal.

After scoring in nine straight games for City, Haaland will have a chance to extend his streak to double digits against Southampton this weekend.

Previous Real Madrid 2-1 Shakhtar Donetsk: Holders make it three wins from three
Next The biggest Pixel 6 frustrations that Google should fix with the Pixel 7