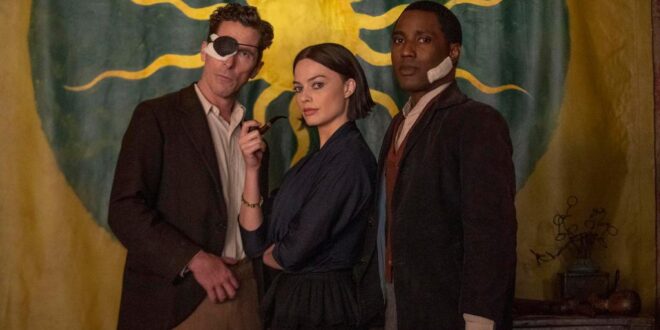 Behold the worst movie of the year

The new movie “Amsterdam” has been shrouded in secrecy for months. We now know why — it’s unwatchable.

Multiple times during Wednesday night’s press screening of David O. Russell’s colossal clunker, I considered walking out. One major critic got up from his chair after 45 minutes, never to return. Meet the luckiest man in the world!

But, no, I stayed for the drama that was as befuddling emotionally as it was astoundingly tedious and impossible to follow. That’s bizarre, because the film, on paper, appears to be a recipe for greatness.

“Amsterdam” has every advantage imaginable. Doesn’t matter. It’s the worst movie of the year so far, and I will bow down to whatever comes along and tops it.

The floperoo begins in 1933 New York City, where Burt (Bale), a World War I vet, works as a doctor helping to repair soldiers injured in battle. His best pal from the 369th Infantry Regiment, Harold (Washington), is a lawyer, and both are summoned, film-noir style, by Liz (Swift, who will have a hard time shaking this one off) to give her dead politician father a graphic autopsy. (Zoe Saldana has a thankless role as a nurse fiddling with intestines.) Liz wants to get to the bottom of his mysterious death.

Then Burt and Harold are caught up in a different murder investigation, and we’re whisked back to 1918 France, where a weirdo nurse named Valerie (Margot Robbie), who collects bullets and shrapnel, is aiding the boys in their recovery. The trio become friends and jet off to Amsterdam; Valerie and Harold start canoodling, and everybody dances and makes vague paintings.

All the while, we catch onto Russell’s worrisome directorial identity crisis. In making a multidecade tale of battlefields, history and prosthetics, he’s channeling Robert Zemeckis. Badly. And in enlisting a Vanity Fair Oscars party of celebrities to play dry eccentrics in a washed-out color scheme, he’s trying to be Wes Anderson. Badly, again. Its annoying smugness is highly reminiscent of Adam McKay’s “The Big Short” and “Vice.”

Everything Russell is so admired for is missing. Where is the indie heart of “Playbook”? The rawness of “The Fighter”? The sensuality and fun of “American Hustle”? Beats me. The only quality to be found in “Amsterdam” is ineptitude.

The story is no easier to track when we return to the 1930s and meet CIA and MI-5 agents (Michael Shannon and Mike Myers), who have front jobs as glass-eye salesmen and a passion for taxidermy birds, or after the wealthy Vozes arrive, played by Malek and Taylor-Joy, who are strange, powerful, sinister and boring.

De Niro is later introduced as a general who Burt wants to give a speech at his upcoming gala for veterans in Manhattan, while other forces desire him to help rise up against the US government.

Rock plays another vet named Milton who occasionally makes lofty admonishments against racism in his usual stand-up cadence. Everybody on the screen tells jokes; nobody in the theater laughs at them. We’re too busy trying to figure out what the hell is going on.

Suffice it to say, the most powerful Swiffer in the world could not clean up this mess — nor can Swift, who is not an actress.

Many of the actors she appears with, on the other hand, are usually excellent but come off like amateurs here. Bale yuks it up, while Washington recedes. Malek and Taylor-Joy cannot resist their addiction to behaving like Martians, and Robbie gives us Harley Quinn-lite. De Niro isn’t awful — merely present.

Really, there’s nothing the cast could do with the hack-job script Russell has written and the shapeless tone he suddenly prefers. Everybody speaks detachedly, as though they’re reading off of cue cards. The blanket noncommittal attitude must have been an instruction. “Blander! Blander!” Russell screamed.

It’s been seven years since the director’s last movie, “Joy.” Here’s hoping that when the next one comes along, he rediscovers joy, and humor, and tension, and structure, and character development, and dialogue and . . .