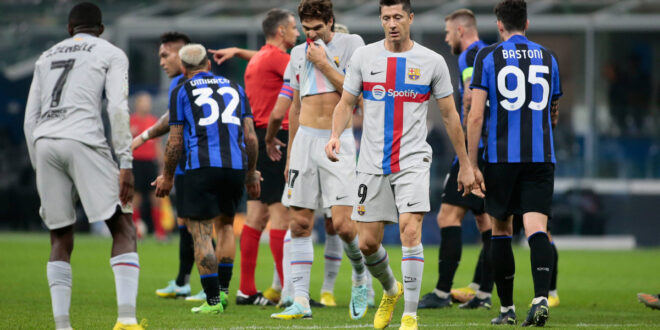 Barcelona loss to Inter ramps up pressure in Champions League

For Barcelona, suddenly, there is pressure. Tuesday’s 1–0 defeat at Inter Milan means that at the halfway stage of the Champions League group stage it sits third in the group, three points behind Inter and six behind Bayern Munich. If Xavi’s side does not beat Inter at home next week, the likelihood is that it will go out of the Champions League before the knockout stage for the second successive season.

Having sold so many assets, having effectively mortgaged so much of the future of the club on the expectation of instant success—beyond La Liga, where it sits in first through seven games—that would be a severe blow. This was always a difficult group, and these last two games, away to Bayern and Inter, were clearly tough, by far the hardest games Barça has faced this season, but the way it has not merely failed to win either, but failed even to score, must be a concern—despite all the entirely reasonable caveats that this is a very new team still in the process of meshing.

And this is not even an Inter Milan side that’s in form. After coming so close to defending its title last season, this has not been a good start to the campaign for Simone Inzaghi, whose side lies ninth in Serie A, having lost four games already this season, including three of the previous four. In part, that’s a result of the muscular problems that have kept Romelu Lukaku out since the end of August, preventing him from re-establishing his partnership with Lautaro Martínez. But there’s also an issue of mentality: the defeat to Roma last weekend was almost entirely the result of Inter losing composure.

There had been talk of a loss of hunger and desire, and there has been pressure on Inzaghi, but Tuesday, Inter defended with great composure. Barcelona had a lot of possession and passed the ball around in that familiar mesmerizing style, but it lacked incisiveness.

At the same time, Inter always offered a threat on the break. Hakan Çalhanoğlu had given a warning with one long-range effort that Marc-Andre ter-Stegen tipped over, and Inter probably would have had a penalty but for an offside in the build-up on another sequence, but the breakthrough did arrive in first-half injury time, with Çalhanoğlu scoring with a clever reverse shot from just outside the box. It was a fine finish, but Barça will wonder how he was given so much space just outside the box when there were defensive players in the area.

From a Barcelona point of view, there must also be fears that a familiar problem is resurfacing. Since being held to a 0–0 draw by Rayo Vallecano on the opening day of the season, Barcelona has scored 19 times in winning six successive league games. There, its possession-heavy style can still overwhelm opponents, but against stronger opponents in Europe, Barcelona has found it rather more difficult.

The failure to score at Bayern could perhaps be written off as slightly freakish: Barça was the better side for much of the game, but failed to score and was undone by a quick-fire double just after halftime. If anything, Tuesday’s was a more worrying performance. Away at Bayern, the issue was a failure to take opportunities; this was more about not creating them at all. Robert Lewandowski, who wasted two golden chances in Munich, was barely involved—he had just 30 touches in the game and maintained his lifelong drought at San Siro—his only opportunity a half-chance as a ball scooted across the top of the box.

There’s a danger of course, of overreacting. Ousmane Dembélé hit a post, Pedri had a goal ruled out because of a handball by Ansu Fati in the build-up and there was a very plausible penalty appeal against Denzel Dumfries that was denied, but as the second half went on, the intricate patterns fell away and Barcelona became increasingly restricted to crosses from Dembélé. After all the doubts about his future with the club, the France international now seems a mainstay, and he was a persistent danger on either flank.

Generally, though, Barcelona ran out of ideas and, as it did so, it grew increasingly petulant, easy prey for some fairly basic gamesmanship from Inter. Xavi, entirely needlessly, got himself booked for protesting about Pedri’s effort being ruled out, the second time he had tried to influence the referee as he consulted the VAR screen, and his frustration seeped out onto the pitch.

This Barcelona clearly has a lot of promise. It clearly is a step up on last season’s squad. It is growing. But two tough away Champions League games in a row have produced a similar result (and Andreas Christensen’s injury adds to a budding crisis at center back). If this really is to be a Barcelona side that approaches the levels of its recent past, that lack of attacking imagination against better sides is an obvious area to improve.